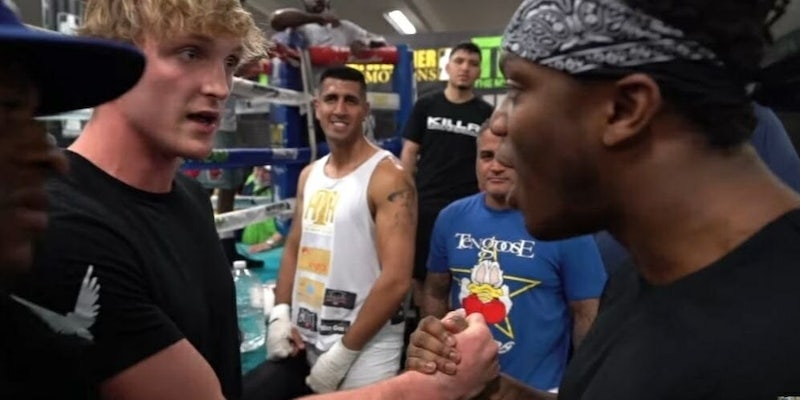 It’s not just one fight, though.

The YouTube beef between KSI and Logan Paul will officially be settled in a boxing ring this summer. And they’re actually going to fight twice.

Despite plenty of posturing between the two camps for the last several weeks over negotiations and whether the two would split the profits 50-50, KSI’s management team confirmed in a tweet that the deal for an Aug. 25 bout between the two massively popular YouTubers had been finalized.

✍️ YouTubers KSI and Logan Paul have now signed to fight each other on August 25th at Manchester Arena.

They've put together a two-fight deal and everything. Rematch in the US! pic.twitter.com/rUrX69XBvp

Though neither YouTuber is a professional fighter and though both would likely get dominated by the rawest of prizefighters, this deal could end up being the most-watched boxing match in history. When KSI—who has more than 18.4 million subscribers—knocked out fellow British YouTuber Joe Weller last month, more than 1.6 million people watched it live on YouTube. Since then, the event has been viewed nearly 26 million times on KSI’s channel alone.

KSI and Weller also sold out a 7,500-seat arena in London. With the addition of Paul and his nearly 17 million YouTube subscribers, you can also expect this fight to sell out the Manchester Arena in the U.K. and its 21,000-seat capacity. As KSI described in his video confirmation of the deal, it could be the “the biggest live YouTube event in history” (and the “biggest white collar boxing event,” as well).

The fight apparently wasn’t easy to make, though.

The two have been sniping at each other since KSI called out the Paul brothers in the ring after he had stopped Weller. But a deal hadn’t come together. In the meantime, both recorded themselves training for the fight at Floyd Mayweather’s boxing gym in Las Vegas.

KSI showed himself getting trained (and getting made fun of) by prolific trainer Floyd Mayweather Sr.—and the father of Floyd Mayweather Jr., the best boxer of his generation—and getting knocked to the ground by Badou Jack, one of the best light heavyweights in the world today.

Though Paul wanted assurances the profits would be split fairly, he tweeted last week that KSI’s team was trying to hoodwink him into what he considered a bad deal.

That contract read that KSI would reap all the profits from the U.K. fight, but when the two had a rematch in the U.S. before the end of next February, Paul would take home all of the money generated from a second bout (if the rematch was canceled by KSI, Paul would be entitled to half of the U.K. fight money, and if Paul pulled out of the second fight, KSI would keep it all).

(To be fair, a rematch in the U.S. wouldn’t necessarily sell better. If the first fight is a bore, the second match probably won’t be as in demand. Also, the argument could be made that U.K. boxing fans are more passionate than their American counterparts.)

Last week, Paul vlogged himself confronting KSI at Mayweather’s gym, where the two shook hands on camera and agreed to a 50-50 split.

KSI is slightly favored to win, even though the 22-year-old Paul is the physically bigger man.

Still, it’s hard to determine who will triumph. For a rank amateur, the 24-year-old KSI looked solid in blasting out Weller. But Paul, a former high school wrestler, has an athletic background. They might not be real boxers and their fight will probably be sloppy, but it’ll probably be exciting to watch.

It also might not be free to watch. Unlike KSI’s fight with Weller, fans might have to pay “a nominal amount” to see the bout, according to the Independent. That would ensure Paul and KSI would make even more money from the deal.

At this point, it’s unclear if a few much-discussed undercard bouts, including Jake Paul vs. KSI’s younger brother Deji and Nick Crompton vs. Behzinga, have been finalized. But the main event is done, and now KSI and Paul have five months to train for what will be some of the biggest moments of their online lives.

“Do me a favor,” Paul told KSI in their confrontation. “Get in the ring. Start training. Start sweating. Because I’m coming in hot with the guns, baby.” After KSI declared that he would beat up his opponent, Paul responded by saying, “I hope so. Somebody’s got to do it. And somebody’s going to get knocked the fuck out, bro.”

And you can bet that tens of millions of people will be watching along on YouTube.