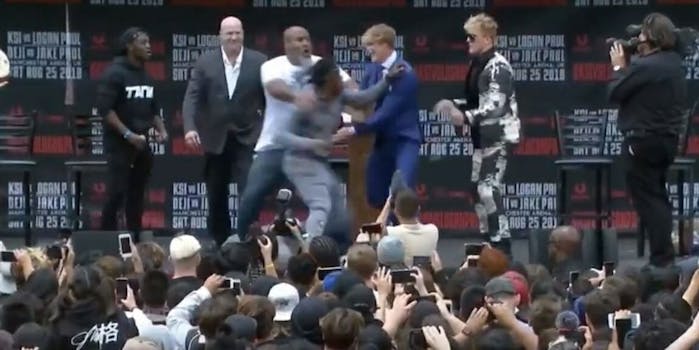 These guys are ready to knock each other out.

A press conference that was filled with trash talk between Logan Paul and KSI nearly escalated until a brawl Saturday when Paul tried to rip off KSI’s headband and the U.K. YouTube star tried to attack his American counterpart.

A few days after the two traded insults at a nightclub, they were on a podium in front of the Los Angeles Memorial Coliseum on Saturday hyping their Aug. 25 fight in Manchester, England. The two were talking trash to each other for most of the press conference—and they were preceded by younger brothers Jake Paul and Deji, who spent the majority of their time together insulting each other’s merchandise, outfits, and fan bases.

At one point, KSI pulled out a blonde wig and pretended to be Logan Paul, who then walked over and bent over next to KSI. Paul ripped off the wig and then tried to take off KSI’s trademark headband. That’s when KSI tried to attack Paul.

He was held back by former heavyweight titlist and press conference MC Shannon Briggs, and immediately, both YouTube stars’ friends jumped on the stage to break up the possibility of a fight and to talk trash to each other.

“What’s up, bitch?” Logan Paul yelled into the microphone, and Jake Paul responded with, “Yeah, you fucking pussy.” Deji begged for Jake Paul to come near him, and soon after, the press conference ended.

Though the near fight might have been real—sometimes, legitimate fights break out during real boxing press conferences—there’s a good chance this was a set up to get more fans to pay attention to their fight in August. The press conference was streamed on YouTube, and at times, nearly 300,000 people were watching it at the same time.

Which means the actual fight will probably be watched by tens of millions of people, all of whom will get to see if KSI or Paul can accomplish what they say they can do and knock out their opponent in the most brutal way possible.