Photo via The Department for Culture, Media and Sport/Flickr

The most tweeted play came from the Brazilian soccer team.

The torch may be out in Rio, but the data has come in for Twitter’s winning Olympic moments—and it’s not what you might expect.

While primetime U.S. coverage of the Olympics focused heavily on gymnastics, swimming, beach volleyball, and track and field, it was soccer that reigned supreme on Twitter. According to the social platform, the most-tweeted-about moment was Brazilian soccer player Neymar’s penalty kick in a shootout against Germany, which won Brazil its first gold medal in soccer. (His first goal against Germany was the third top moment.)

#BRA tops #GER in a shootout w/ a HUGE Weverton save & a finishing goal by @NeymarJr! #GOLD https://t.co/3nZ10QtWAW
https://t.co/ougOmhhDk2 While swimming was talked about most on Twitter, soccer was the second most popular sport—and one not widely shown in the U.S. Olympics coverage. Even the men’s final between Germany and Brazil—a rematch of the 2014 World Cup semifinal in which Germany demolished Brazil 7-1 and ended in redemption for Brazil—aired on NBC Sports, one of the network’s spin-off channels, instead of NBC’s flagship channel. It was also a sport in which the U.S. didn’t dominate: The women’s team was eliminated early by Sweden, and the men’s team didn’t even qualify.

Neymar was also one of the top athletes mentioned throughout the Olympics, just behind U.S. swimmer and angry meme Michael Phelps and Jamaica’s Usain Bolt, who three-peated the three events he ran in. Phelps, who won five gold medals and a silver in Rio, was by far the most popular athlete with more than 5 million tweets about him throughout the games, according to Spredfast, a social media analytics firm.

And while Phelps Face became a meme staple early on in Rio, only a small fraction of the conversation surrounding Phelps was about the meme itself; most people were tweeting about his performance or his medals. 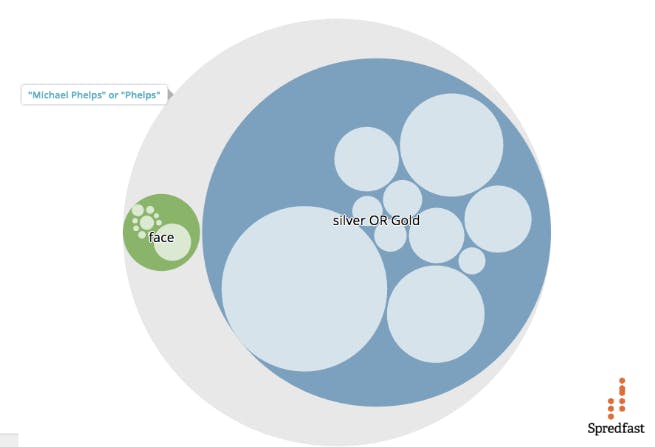 But for Ryan Lochte, his antics out of the pool dominated conversation on Twitter. While some people may have tweeted about his swimming performance early on, his claim that he and his teammates were robbed at gunpoint soon sparked international headlines even after Rio. When Brazilian authorities revealed that he wasn’t telling the truth, Lochte eventually apologized and his sponsors dropped him. Three of the top five search terms for Lochte are about the robbery. 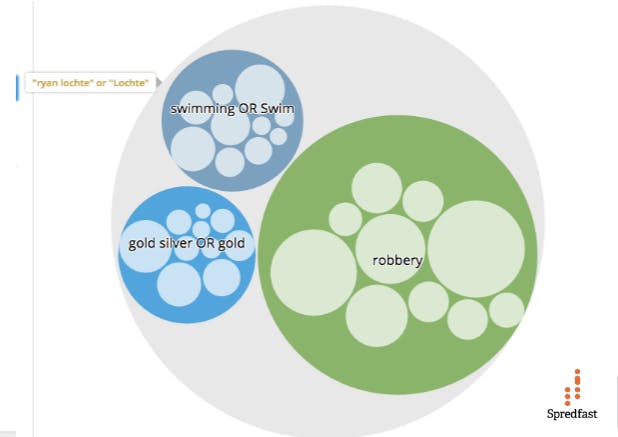 According to Twitter, the big social media stars of the games were Bolt and U.S. gymnast Simone Biles, who won five medals in Rio; seven of the top 10 tweets from the Olympics came from them, the most popular being Biles meeting celebrity crush Zac Efron.

proof : had to do a retake bc I thought we were taking a picture then he kissed me instead ❤️ pic.twitter.com/rld33V14qe

However, Twitter’s roundup of GIFs, Vines, and video showcase the monopoly NBC, the U.S. broadcaster of the Olympics until 2032, had on the games. Gone were the live-GIFing, the remixes, and the memes from creatively twisted outside sources, since the International Olympic Committee tried to copyright all animated or video formats of the games. And Twitter was hasty to remove any of that material almost as soon as it appeared online, drawing criticism that Twitter took down Olympic content down faster than it does harassment.

Overall, the games thrived online, even if TV ratings for the Olympics may have been down.