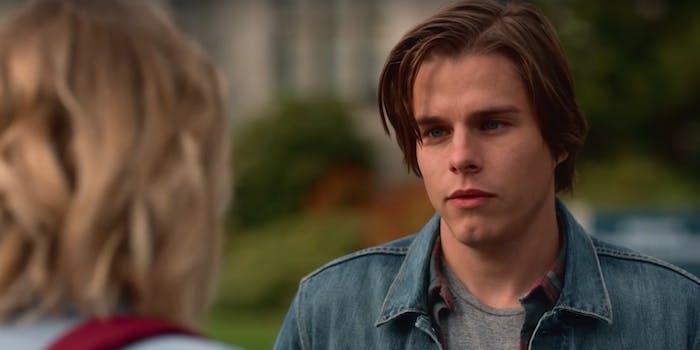 ‘The Order’ casts an entertaining spell

Netflix’s supernatural series The Order is an odd duck of a show. It feels like a relic from five years ago when YA adaptations were all the rage. Witches, werewolves, spells, incantations, and transformations abound. There are secret societies, and the fate of the world is at stake. Normally this kind of stuff makes my eyes glaze over. Not because I think I’m better than this material—I assure you I am not—but because these kinds of stories tend to become toothless piles of mush by the end. But there is a lot to enjoy in The Order. The show has its tongue planted firmly in cheek, and its sense of humor is a frequent source of amusement. Between the laughs is a fun, twisty narrative and a game cast to tie it all together.

RELEASE DATE: 3/7/2019
CREATOR: Dennis Heaton
STREAMING: Netflix
College freshman Jack Morton hopes to get into the secret society The Order, but ends up caught between warring factions of witches and werewolves.

Jack Morton (Jake Manley), looking like this generation’s Shawn Hunter, is a college freshman out to make an impression. He’s a go-getter with his eye on joining Belgrave’s secret club, The Order. Jack and his grandfather Peter (Matt Frewer) have worked toward this goal for years, fueled by the loss of Jack’s mom and Peter’s daughter, Chloe. The Order doesn’t waste any time, as Jack is clearly the best option for the new class of pledges. Just as Jack is on the cusp of getting everything he’s pursued, he gets turned into a werewolf. Caught in no man’s land, Jack becomes a double agent. Are you on board yet?

Sadly, The Order plateaus just when it appears to be leaping headfirst into Cuckoo Town. The show feels the need to convey a lot of information, and the exposition is a buzzkill. Between the Hermetic Order of the Blue Rose, the Knights Of Saint Christopher, necromancers, and necrophones, I felt myself tuning out. This itch to throw in the towel first hit me in the third of The Order’s ten episodes. Luckily, the show’s funny bone stays strong. Whenever the show goes heavy on mumbo jumbo, the characters are quick to deliver snarky commentary. There is a moment where someone lists good and bad members of The Order, including Michelle Obama, Oprah, Warren Buffett, George W. Bush, Mussolini, and Oprah again. You’ll have to watch yourself to see which columns they fall into.

The Order could overcome its mythology issues if it indulged its campiness more, or if it were trashier. The show carries a TV-MA rating, but that’s mainly due to profanity. With werewolves and witches running around, there should be more blood—especially since the characters, and the non-supernatural students, appear to have little regard for death. It quickly becomes hilarious how many random, horrible deaths the community seems to brush off. When the show does get violent, it usually looks cheap, and the editing makes the action incoherent. Why have a mature rating if you aren’t going to take advantage of it?

Back to the good stuff. The cast is solid across the board, with the actors playing the students making the strongest mark. Manley gives a fun and charming performance as Jack. Sarah Grey plays Jack’s would-be girlfriend and key member of The Order, Alyssa. Grey and Manley’s chemistry pops, and they make the most of a relationship that’s both “will they/won’t they” and star-crossed. Supporting players Sam Trammell, Favour Onwuka, Louriza Tronco, and Kayla Heller make the most of their roles. While some cast members stumble a bit over the exposition, everyone is on point with their wisecracks. Lines like “Why do we pronounce it ‘WEAR-wolves’ but spell it ‘WERE-wolves’” or “I hope you’re not planning to major in self-sabotage” shouldn’t work, but they do.

The overarching plot gets pretty convoluted, but creator Dennis Heaton is wise enough to root most of the drama in the characters. Not only is Jack caught between The Order and The Knights, but his werewolf status pits him against both Alyssa and his long-absent father. It gives Manley something to build his performance around, and he sells it well.

The Order doesn’t shift to a higher gear in the second half of the season, but it sustains its quality. It’s a moderately entertaining show that will help kill time in these final weeks before Game of Thrones returns. Netflix doesn’t lack for young adult-skewing supernatural shows, and The Order isn’t must-see TV, but it has jokes, witches, and werewolves. How can you not be entertained?