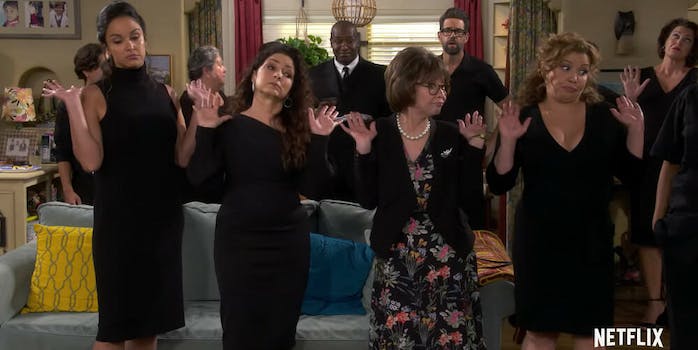 After announcing plans to diversify its content, Netflix canceled a show about a Latinx family.

Sony’s reboot of the ’70s sitcom One Day at a Time may have developed a cult following, but it failed to bring in necessary viewership numbers, Netflix announced Thursday. The streaming service said that the series’ newly released third season would be its last on the platform.

Over several tweets, Netflix laid out a seemingly heartfelt apology at this “difficult decision” and thanked the show’s creator, Norman Lear, for helping reboot the series with a Cuban-American family. “And to anyone who felt seen or represented — possibly for the first time — by ODAAT, please don’t take this as an indication your story is not important,” Netflix’s statement reads. “The outpouring of love for this show is a firm reminder to us that we must continue finding ways to tell these stories.”

And to anyone who felt seen or represented — possibly for the first time — by ODAAT, please don’t take this as an indication your story is not important. The outpouring of love for this show is a firm reminder to us that we must continue finding ways to tell these stories.

Me reading Netflixs tweet explaimg why they had to cancel the best TV show they've ever had on their service #SaveODAAT pic.twitter.com/wTU2TKrHnS

cancelaron one day at a time pic.twitter.com/1cdUSEkWSd

Given One Day at a Time’s focus on a Latinx family and its inclusion of queer characters and themes, its cancellation seemed in direct contrast with an announcement Netflix made less than two weeks ago via YouTube about its new commitment to “making room” for increased diversity on its platform.

Additionally, many users blamed the lack of viewership on Netflix’s lackluster advertising for the show, especially compared to its campaigns for those with white leads like The Umbrella Academy. The service’s efforts were so minimal that last month, several One Day at a Time cast members took the job into their own hands and launched a social media campaign to drum up support.

Sense8 was too expensive.
Gypsy didn't convinced the critics.
Everything sucks wasn't enough.
One day at a time didn't have enough views.

YET PEOPLE ARE STILL TALKING ABOUT THESE SHOWS DAILY. YOU JUST HATE MINORITIES AND IT SHOWS.#SAVEODAAT

netflix: “iT wAs sUcH a pAinFul dEcIsIoN tO cAncEl ThE sHoW”

If the show’s viewership underperformed, fans asked, how did #SaveODAAT become a trending hashtag in a matter of hours? A Change.org petition to renew One Day at a Time for a fourth season simultaneously racked up nearly 5,000 signatures in less than five hours.

Some fans hoped stirring up enough protest from fans could encourage another network to give it a new home, like how NBC came to the rescue of Brooklyn 99 after Fox’s cancelation. The show’s Melissa Fumero chimed in to underline One Day at a Time’s importance in Latinx culture.

Brooklyn 99 was renewed within a day… do the same for One Day At A Time. #ODAAT

I am heartbroken. The Latinx community NEEDS this show, and irregardless of that ITS A GREAT, FUNNY, & HEART FELT SHOW WITH FANTASTIC PERFORMACES! SOMEONE SAVE IT! And yeah, I meant the irregardless #SaveODAAT https://t.co/HWoNSBv4dD

Fans also quickly pointed out that Netflix forked over $100 million to hold onto the rights of another sitcom, Friends. And the streaming service renewed its original drama 13 Reasons Why for additional seasons despite controversy about its graphic depiction of suicide.

Netflix will pay 100 million dollars for to keep friends, but cancels One Day At A Time #SaveODAAT

Netflix did not immediately respond to the Daily Dot’s request for comment. Preempting the cancellation with a statement seems to imply the streaming service knew it might receive backlash. After all, most canceled shows just fade away quietly. Whether Netflix anticipated the fan reaction to be this vehemently massive, though, is anyone’s guess.