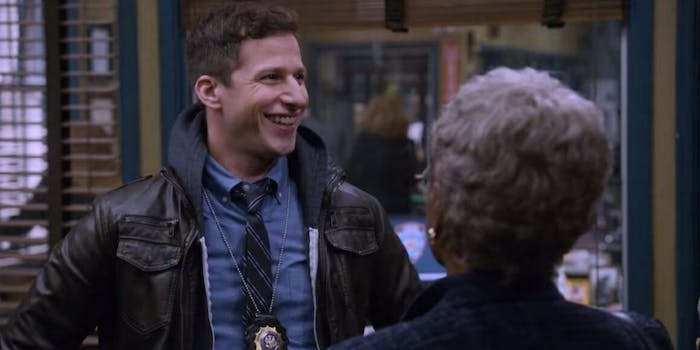 NBC swoops in to save ‘Brooklyn Nine-Nine,’ and the internet is stoked

One day after Fox canceled Brooklyn Nine-Nine, the Andy Samberg comedy has been rescued.

It was reported late Friday night that NBC picked up the show for its sixth season, leading to plenty of joy and relief on the internet, especially after a variety of streaming sites thought about picking up but ultimately did not.

The internet, though, was stoked.

Hey everyone, just wanted to say no big deal but….
NBC JUST PICKED #BROOKLYN99 UP FOR SEASON 6!!!
Thanks in no small part to you, the best fans in the history of the world!

SQUAD YOU DID IT #BROOKLYN99 WILL BE ON NBC FOR OUR 6th SEASON!

#Brooklyn99 IS COMING BACK FOR SEASON 6 YOU GUYS ON NBC!!!!! You did this!! You got loud and you were heard and you saved our show!! Thank you!! Thank you to NBC!! NINE NINE!!!!! pic.twitter.com/cTycfF4FoR

THERE'S GOING TO BE A SIXTH SEASON OF #BROOKLYN99 ON NBC AND I AM PROCESSING THIS LIKE A MATURE ADULT I'M SO HAPPY pic.twitter.com/GwmTRaVdY0

In a situation that is 50 percent noice and 50 percent toit, #Brooklyn99 has been revived by NBC https://t.co/foxNuvinBe pic.twitter.com/8KfIxjoM39

Hulu and Netflix reportedly passed on picking up the series before NBC swooped in for the rescue.

“Ever since we sold this show to Fox, I’ve regretted letting it get away, and it’s high time it came back to its rightful home,” NBC Entertainment chairman Robert Greenblatt said in a statement. “Mike Schur, Dan Goor, and Andy Samberg grew up on NBC, and we’re all thrilled that one of the smartest, funniest, and best cast comedies in a long time will take its place in our comedy lineup.”