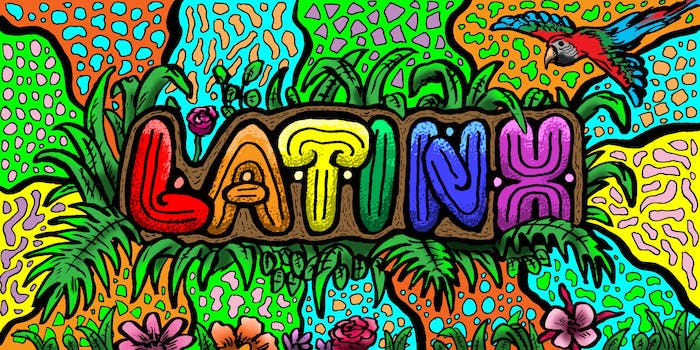 What does it mean to be Latinx?

A look into the identity that rejects gender binaries in language and beyond.

The term “Latinx” (pronounced LAH-teen-ex) has become more commonplace in recent years. But I wasn’t familiar with the term as a self-identifier until I saw it frequently on social media. Throughout my childhood, adolescence, and early adulthood, Latinx wasn’t even in my vocabulary. I had plenty of other descriptors—some I applied to myself and others that were essentially thrust upon me: Mexican-American, Asian-American, first-generation, mixed race, multicultural, multiethnic, etc. What I struggled with most was the ability to just pick one. So what is Latinx?

Despite its growing popularity and ubiquity, especially in the LGBTQ community, confusion about what Latinx actually denotes remains prevalent. In some cases, that confusion even exists for people who identify as Latinx.

Growing up in the Midwest complicated my identity issues. No one looked like me. No one had immigrant parents like me. No one was half this and half that—at least, that’s how it felt. And while my hometown in Nebraska did have some ethnic and racial diversity, it was very sparse. I always felt like an “other.” Looking back now, I can clearly see that so many of my deepest insecurities were rooted in the feeling that I never quite belonged anywhere.

By the time I got to college, I began making sense of—and embracing—my multicultural heritage. It helped that my alma mater had a dedicated multicultural center where I could go and connect with a community that really seemed to get me. I decided to minor in ethnic studies and took classes that helped me put the puzzle of my identity together. I finally became comfortable self-identifying as a Latina and, more broadly, as a multicultural, first-generation American.

While I use Latina to represent one aspect of my identity, I prefer Latinx when referring to a wider, more inclusive group of individuals who have some type of Latin American ancestry. Of course, when and where Latinx is used varies greatly between individuals and communities.

So, let’s start with the basics.

What does Latinx mean?

Although the terms “Latino” and “Latina” have been around for decades, Latinx is a relatively new—and, some may argue, modern—interpretation of those identifiers. Latinx is gender-neutral, which means it’s an identifier that moves beyond gender binaries of male (Latino) and female (Latina). Latinx is inclusive of the intersecting gender and ethnic identities of Latin American descendants. Put more simply, Latinx makes room for everyone, including those who identify as transgender, queer, agender, non-binary, gender non-conforming, or gender fluid.

Writer Jack Qu’emi, who is self-described as a queer, Afro-Latinx, non-binary femme, explained the definition of Latinx in terms of gender and linguistics.“The x [in Latinx], is a way of rejecting the gendering of words to begin with, especially since Spanish is such a gendered language,” Qu’emi told Public Radio International in 2016.

While Spanish isn’t the only language spoken by Latinx communities, it is, by and large, the most common. Its inherent gendering is incredibly problematic for individuals who do not identify as male or female. Ideally, an inclusive term like Latinx would be accepted and embraced across these communities. Unfortunately, that isn’t always the case.

Some critics of using Latinx as an identifier have argued that it’s a “blanket term” created by outside groups to cluster multiple cultures together under “one common colonized identity.” Translation: Accepting a single Latin American identity may lead to the erasure of marginalized identities like indigenous people, while emphasizing lighter-skinned mestizos who are people of mixed European (likely Spanish) and other indigenous ancestries.

Another argument against Latinx is rooted in the quest for simplification or, perhaps, minimalism. Some in Latinx communities wonder whether they really need a new word to describe themselves. Since we’re a group with myriad identities–Hispanic, Chicano, Xicano, Nuyorican, Tejano—opponents of Latinx question the necessity of adding another term to the already crowded mix.

Others say that if the intent is to make Spanish gender neutral, the x is an impractical attempt at doing so. Gilbert Guerra, a sophomore at Swarthmore College, went viral for his column advocating against the widespread use of Latinx.

“The use of the identifier ‘Latinx’ as the new standard should be discouraged because it is a buzzword that fails to address any of the problems within Spanish on a meaningful scale,” Guerra wrote. “We have no prejudice towards non-binary people. We see, however, a misguided desire to forcibly change the language we and millions of people around the world speak, to the detriment of all.”

Guerra’s perspective is that the proposed “degenderization” of Spanish would result in words such as Latinos, hermanos, and niños being converted into Latinxs, hermanxs, and niñxs respectively.

Undoubtedly, Latinx is a bit of a band-aid solution to a much larger problem. It’s not likely that such a diverse group of people who represent so many countries, cultures, and languages will ever agree on one word that describes everyone perfectly. That being said, I still stand by my decision to incorporate Latinx into my vocabulary because its default is inclusivity, and we need more language that falls into that category.

One of the reasons the Latinx identity has picked up steam is that Latinx communities are slowly beginning to take up more space in the public discourse. With topics like immigration, the border wall, and DACA being regularly discussed issues of the day, more and more people are finding it necessary to use a word like Latinx when these issues come up.

What’s more, Latinx are on track to become the largest minority majority in the United States: In 2044, Hispanics—described by the U.S. Census Bureau as “a person of Cuban, Mexican, Puerto Rican, South or Central American, or other Spanish culture or origin regardless of race”—will make up 25 percent of the U.S. population. Keeping that in mind, it’s more critical than ever to understand the prevalence of Latinx, its complex origins, and why some people in Latinx communities use the term and why some do not.

While I have my own viewpoint on Latinx, I respect anybody’s freedom to self-identify as they please and would never impose my preferences onto someone who disagreed with them. What’s most notable about this whole conversation is that many people of Latin American descent are exploring their layered, complicated ancestries and revealing new, intensely personal identities. And that’s really what it’s all about.