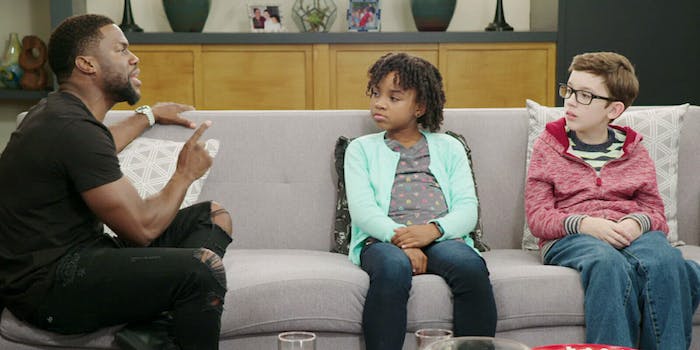 Aimed squarely at children and families, Guide to Black History ironically casts Hart as a responsible father talking to his frustrated child. (The irony, of course, lies in his Oscar debacle and revelations about his personal life.) Nevertheless, combined with intermittent reenactments of rarely acknowledged Black heroes of yesteryear, Hart’s self-deprecating brand of comedy works within this medium.

Hart gets an early laugh through the use of his Big Book of Black History. His daughter tries to swipe through the pages like an iPad, a slight crack at tech’s hold on the youth. One of the best bits is about Henry “Box” Brown, a former slave turned magician who earned his freedom by sending himself to Philadelphia in a wooden crate via the U.S. Postal Service. Howery plays Brown in the reenactment, and there are jokes aplenty regarding the shipment of his Black body. It’s here that the primary issue with the show appears: The gags tend to be subtle, which would appeal to adults, but likely be lost on children.

Arguably the most effective story belongs Josephine Baker, who has one of the greatest biographies of any American. The renowned singer and dancer not only entertained the world’s elite, but served as a civil rights activist and French government operative who aided the French Resistance during World War II. After the fall of the Third Reich, she was awarded the Croix de Guerre and named a Chevalier of the Légion d’honneur.

While Tiffany Haddish also earns a few laughs for her portrayal of astronaut Mae Jemison, most of the remaining stories run dry—educational, to be sure, but lacking a punch. The tale of heart surgery pioneer Vivian Thomas—including his conflicted, and later contentious, relationship with Dr. Alfred Blalock—goes one cringeworthy scene too long. The show would’ve benefited from featuring half as many historical figures and beefing up the production value (and comedic elements) in the remaining stories.

Ultimately, however, Kevin Hart’s Guide to Black History accomplishes the comedian’s goal of presenting Black history with a palatable vocabulary for children. More specifically, Hart inspires children of color to consider their complicated history in a more positive manner, apart from the usual discussion of slavery.