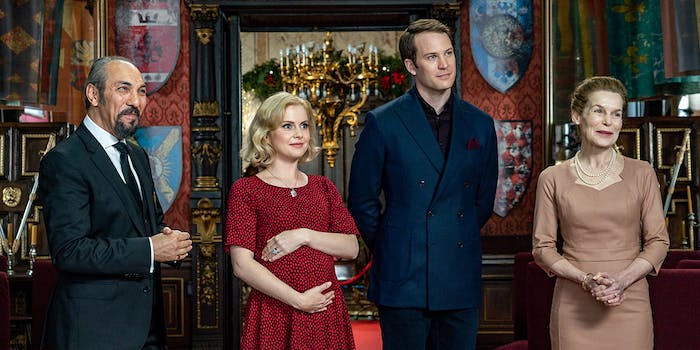 ‘A Christmas Prince: The Royal Baby’ is a disappointing sequel

'A Christmas Prince: The Royal Baby' is hardly even a Christmas movie.

We last left Amber (Rose McIver) and Richard (Ben Lamb) on their wedding day in A Christmas Prince: The Royal Wedding, after the couple endured the final hurdles of their engagement—which included massive political corruption and pushback against Amber’s wish to have more autonomy as Queen of Aldovia.

A Christmas Prince: The Royal Baby

A Christmas Prince: The Royal Baby fast forwards through the first year of Amber and Richard’s marriage, highlighting their accomplishment of resolving gender inequity in the country to bring Aldovia to the 21st century. It begins the following December, with Amber pregnant and expecting her first child within the month. The royal couple are also hosting King Tai (Kevin Shen) and Queen Ming (Momo Yeung) of Penglia to renew a 600-year-old sacred truce. Everything appears to be going according to plan until the treaty is stolen, putting peace in jeopardy and threatening an ancient curse that could affect the royal baby.

Unfortunately, the film can barely be considered a Christmas movie. Sure, it happens to fall on Christmas Eve and the castle may be decked out for the holidays—but that’s pretty much it.

The film attempts to continue themes begun in the second installment, such as feminism and the monarchy and the fight for modernity in ancient kingdoms, but it falls short. A Christmas Prince: The Royal Baby is a weak sequel because its plot both doesn’t make sense and isn’t interesting—proving that the franchise writers are running out of material. It seems silly to believe that two countries existing in peace would suddenly be at war again if a piece of paper went missing; it’s far more likely that a new document would be drawn up. The addition of an “ancient curse” is so preposterous, the majority of the characters don’t even take it seriously.

A Christmas Prince: The Royal Baby would have been more successful if it had doubled down on its original themes about feminism in government. It would have been much more interesting if it had followed Amber’s fight for equal rights. There could have been conflict about whether a first-born daughter could inherit the throne, or the royals from Penglia could’ve refused to sign a treaty with a progressive nation. There are so many ways the film writers could have made this sequel compelling, but they chose not to—probably in an effort to keep the franchise an apolitical escape from the divisive real world.

In addition to throwing out its more compelling themes, the film also underused its best supporting characters. In A Christmas Prince: The Royal Wedding, Princess Emily (Honor Kneafsey) and Amber’s dad, Rudy (Daniel Fathers), were standout cast members who added the best one-liners, roasts, and moving moments to the film. In The Royal Baby, Princess Emily and Rudy barely earn any screen time. Princess Emily rarely makes any jokes, and her main role is planting the seed of fear about the ancient curse. Rudy spends 90% of the film in the JFK airport and doesn’t arrive to Aldovia until the last 10 minutes.

Instead, the film focuses on its worse supporting characters, like Simon (Theo Devaney) and Melissa (Tahirah Sharif), as well as newcomers King Tai and Queen Ming. Tai and Ming add little to the story. Tai is a total bro who commends King Richard for his days as a “playboy” and admits that his wife does all the work. Ming starts off opposing Amber’s efforts for equality, but the writers mostly miss an opportunity to make her character actually controversial.

Folks who seek a break from politics and reality will find comfort in A Christmas Prince: The Royal Baby because it asks little from its audience mentally and avoids confrontation by having a paper-thin plot. But it can also hardly be considered Christmas-themed, which those same viewers may find disappointing. Instead, viewers would be better off watching other holiday-themed Netflix originals, such as the Knight Before Christmas and The Princess Switch.