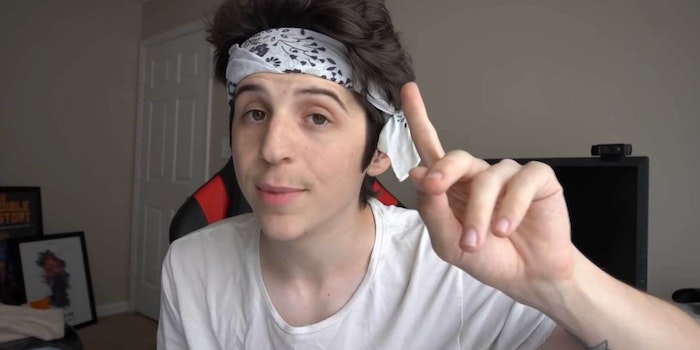 'Being in tears and having mental breakdowns day after day is difficult.'

MrBeast is lauded around many corners of the internet for his YouTube philanthropy, but at least one of his former employees is disgruntled. Matt Turner—aka @Turnur—let loose on Twitter this weekend, saying MrBeast bullied him and called him “mentally retarded.”

“I’m not going to make a video about my time editing for MrBeast, but I will say that was the most mentally draining time of my life,” Turner tweeted. “I was yelled at, bullied, called mentally retarded & replaceable by MrBeast everyday. Being in tears and having mental breakdowns day after day is difficult, and after a while became too much. After every editing mistake I made, I was made to feel like an absolute idiot, even if the content wasn’t real.”

MrBeast, whose real name is Jimmy Donaldson, is an internet favorite who created the Subscribe to PewDiePie meme and made it go mainstream before it turned dark. MrBeast, who has 24.6 million YouTube subscribers, has also been known to give away millions of dollars to random people.

Turner has painted a less flattering portrait, saying he received no credit for his editing work in an explanation of why he no longer works for MrBeast.

“No credit was given (unless a video I edited got credited to someone else.) editors were told if we ever leave the team we shouldn’t be set up for success after, so no credit will be given,” Turner wrote. “Ideas would be taken, people would be baited into the team, and I would be screamed at and then told ‘I just misinterpreted what I heard’ by his impossible to please momager. We would be forced to RESIGN [non-disclosure agreements], and then told these were our ‘glory days.’ So that’s a summary of almost everyday on the team. That’s what it was like to work for MrBeast, and that is why I don’t work there now. Thanks for tuning in.”

After initially saying he wouldn’t make a video showing his apparent proof, now Turner said he’d create one for later this month.

In response to those tweets, another former MrBeast editor reminded people he had made a video about his employment. “I basically said it was one of the worst consecutive weeks of my life,” @FlyyDoes YT wrote. “I was manipulated by [YouTuber] Keemstar and MrBeast … and the whole internet turned against me basically.”

I used to edit for Mr. Beast. I made a video explaining my experience while I did so, and I basically said it was one of the worst consecutive weeks of my life. I was manipulated by Keemstar and MrBeast on DramaAlert, and the whole internet turned against me basically. https://t.co/6hNPAjQpUn

Turner wrote back to him to say that “the office was in panic mode because everything you said was true. There were basically a ‘how can we cover this up’ meetings, rather than a ‘how can we fix this’ ones. Then the momager wanted to get all ur clients to blacklist you. Toxiccccc.”

Since his allegations, Turner said he had texted briefly with MrBeast, who hadn’t responded to his comments on social media, and that the discussion was “very civil.” MrBeast did not immediately respond to the Daily Dot’s request for comment on Monday morning.