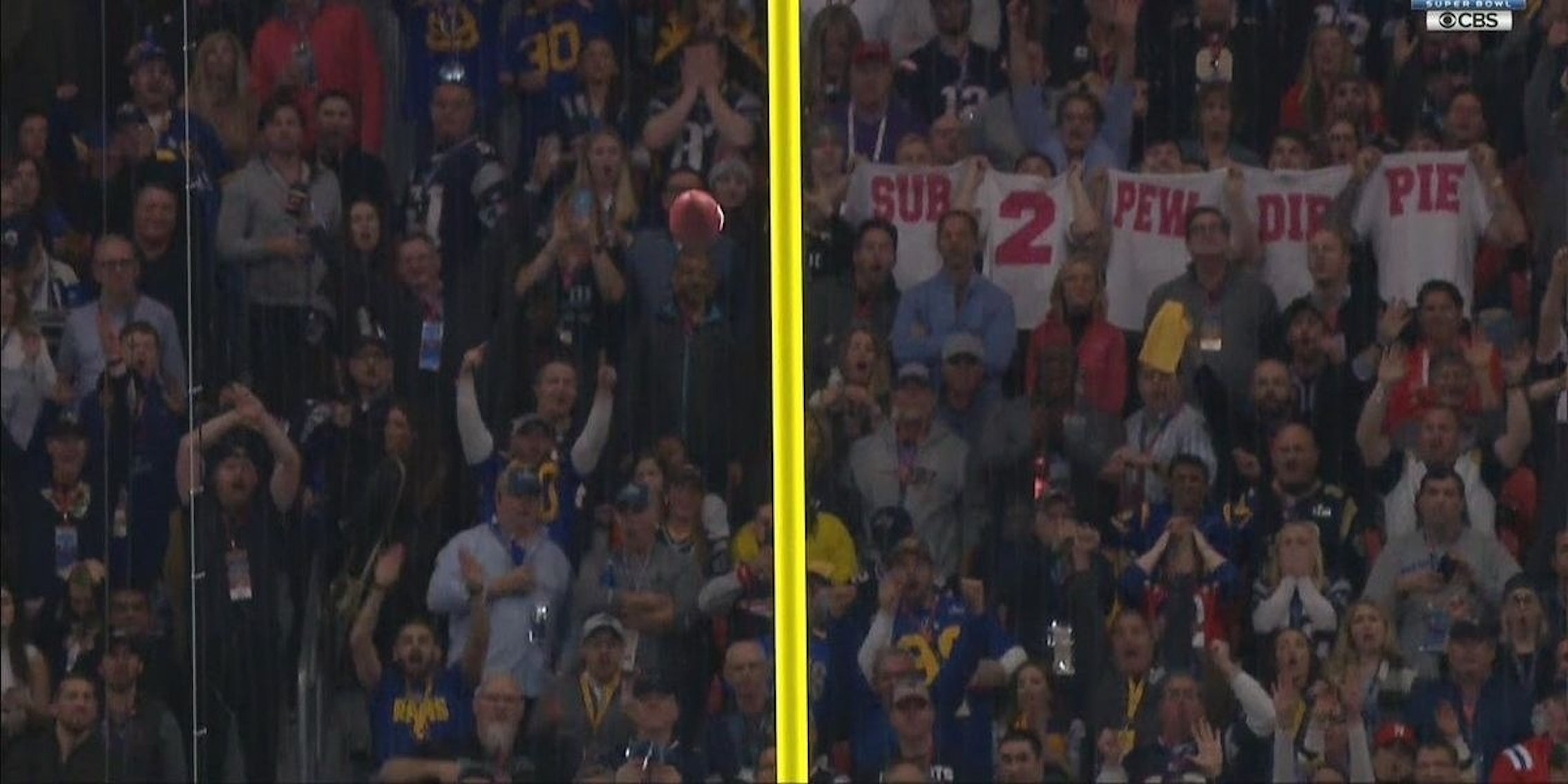 The message was seen by millions.

In his quest to help PewDiePie remain the most popular YouTube channel in the world, MrBeast went as mainstream as he possibly could: the Super Bowl.

MrBeast has made it his mission to keep PewDiePie ahead of Indian music label T-Series in YouTube subscribers by buying billboards and making a 12-hour-long video to support him. On Sunday, he unveiled his latest stunt before the Rams played the Patriots.

WE MADE IT ON THE SUPER BOWL pic.twitter.com/il1E4ie94Y

As MrBeast, whose real name is Jimmy Donaldson, pointed out on Twitter, he bought multiple seats in one of the end zones at Mercedes-Benz Stadium in Atlanta. That way, whenever a field goal or an extra point was attempted on that side of the field, the cameras would pan over the group’s T-shirts that, when read together, spelled out the words, “Sub 2 PewDiePie.”

On Twitter, MrBeast explained: “We bought seats right behind the field goal, every kick on the end zone with rams paint will have our sub 2 Pewdiepie shirts.”

Unfortunately for PewDiePie fans, only 16 points were scored during the game—New England won its sixth Super Bowl by dispatching Los Angeles 13-3—so there weren’t many opportunities for cameras to display the message.

It’s yet another attempt by PewDiePie’s supporters to keep him ahead of T-Series. Fans in Bangladesh and India have begged for people to subscribe, and YouTube star Justin Roberts reportedly spent $1 million on a Times Square billboard. Meanwhile, printers, Chromecasts, and Nest cameras have been hacked to convince people to smash that subscribe button.

As of this writing, PewDiePie has about 83.91 million subscribers compared to T-Series’ 83.79, a difference of about 120,000 subscribers. And maybe MrBeast’s stunt worked.

In the nine days before the Super Bowl, PewDiePie was averaging about 119,000 new subscribers per day, according to YouTube analytics site Social Blade. On Super Bowl Sunday, more than 277,000 subscribed to help keep PewDiePie No. 1 for just a little bit longer.