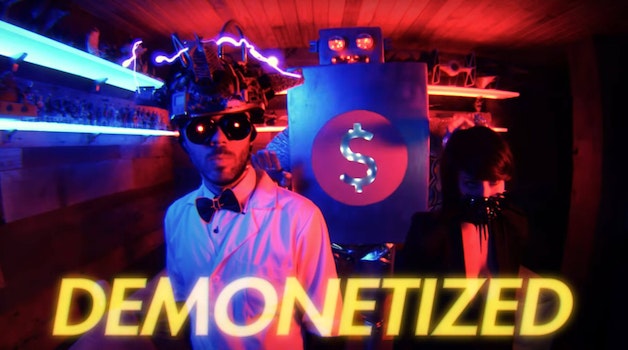 YouTubers expose how keywords like ‘gay’ and ‘lesbian’ lead to demonetization

YouTube creators’ battle with demonetization has been ongoing for years, and though the company has always vowed to make improvements, it’s pretty clear that scale is still an issue. And so is how YouTube treats LGBTQ content.

In a new video titled “YouTube’s Biggest Lie,” vloggers Nerd City, in collaboration with Sealow and YouTube Analyzed, tested out more than 15,000 keywords and phrases to see what would get a video demonetized. Changing the word gay or lesbian to “happy,” for instance, made the video ad-friendly.

Nerd City included a spreadsheet of demonetized words in the comments. The words “straight” and “heterosexual” did not get flagged. Demonetized keywords include “abuse,” “gender,” “hetero,” and “Momo,” the latter of which likely refers to the Momo challenge. Nerd City also points out that some of the countries YouTube outsources its machine-learning to (Indonesia, Malaysia) are ones where homosexuality is still not accepted or is criminalized. This could influence appeals, which are supposed to be done by a human.

YouTube Analyzed did a deeper dive into the list of demonetized words and points out that some “derogatory” words will get the green light if they’re spelled wrong.

Some creators tested it out and got similar results. In this case, using “lesbian” and “LGBTQ” in the title got this video demonetized while using “straight” and “heterosexual” did not.

Figuring out YouTube’s famously secretive algorithm has been an ongoing slog for creators. In 2016, YouTube made a change in policy in an effort to be more upfront with creators about why a video might be demonetized, but around that same time creators noticed that LGBTQ content was being unfairly singled out for demonetization or Restricted Mode.

Last summer, YouTuber Chase Ross claimed one of his videos was demonetized by adding the keyword “transgender.” In August, a group of LGBTQ creators sued YouTube for discrimination and loss of revenue. Elsewhere, creators felt YouTube let popular personalities get away with homophobic harassment and abuse, even as it claimed it supported the LGBTQ community. YouTube CEO Susan Wojcicki apologized to creators in June, and again in September after the botched rollout of its verification process. But many saw the apologies as too little, too late.