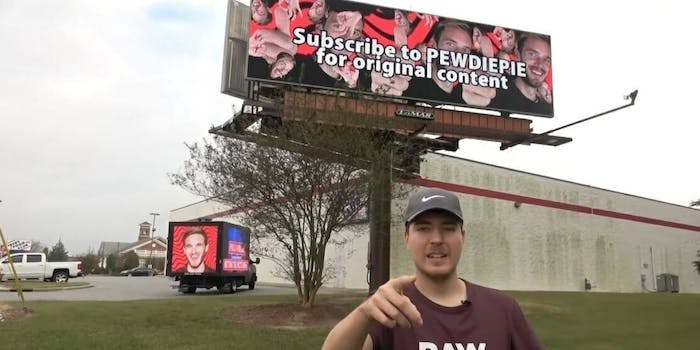 PewDiePie fans are fighting to keep him the No. 1 YouTuber in the world

For many creators, this is a huge deal.

PewDiePie is about to lose his spot as the most popular YouTuber in the world. But his fans are fighting back to help keep him on top of the social media throne, and for now, they’re successfully staving off the challenge from India’s most popular music label and movie studio.

T-Series was predicted to surpass PewDiePie by the end of October. Instead, as of this writing, PewDiePie has slightly less than 68.5 million subscribers, while T-Series has about 67.8 million.

So, what happened? Why is PewDiePie still No. 1 and actually gaining subscribers on T-Series? In part, it’s because of a coordinated effort by PewDiePie’s fans to keep him at the top, including YouTuber MrBeast who has 9.6 million subscribers of his own.

MrBeast posted a video last Friday in which he said, “I bought a bunch of billboards, went on TV, did radio ads, bought bathroom ads, and much more to try and stop T-Series from passing PewDiePie in subscribers … T-Series is growing four times faster than PewDiePie, and if I don’t do anything, PewDiePie won’t be the No. 1 … YouTuber in the world. Therefore, I spent all my money on ads so he can remain the No. 1 most-subscribed-to channel in the world.”

After that video hit YouTube, PewDiePie averaged 255,000 new subscribers per day from last Friday to Monday. T-Series averaged 152,000 per day during that time span.

The issue here in the minds of PewDiePie and those who support him is the idea that allowing a huge company like T-Series to become No. 1 will wound the spirit of YouTube and the independent creators it’s always fostered.

“I don’t really care about T-Series, I genuinely don’t, but I think if YouTube does shift in a way where it does feel more corporate, something else will take its place. I think people enjoy this connection so much, I think something else will just show up, if it feels too corporate,” PewDiePie, who has been No. 1 since 2013, said in a recent video, via the Independent.

PewDiePie’s continued subscriber gains are probably unsustainable in the long term against the powerful T-Series situated in a country of 1.3 billion people. But PewDiePie and his supporters are fighting, and for now, that seemingly is enough to keep him No. 1.