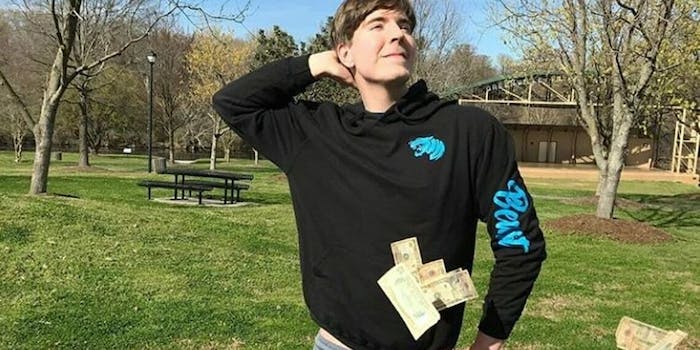 MrBeast says he’s given away $1 million: ‘YouTube pays better than you think’

The popular creator is also upset about YouTube's demonetization process.

MrBeast has proven the age-old adage that sometimes you have to give in order to get.

In a video posted on Christmas, the YouTube star recounted how he originated the concept of giving away large sums of cash for videos that ultimately resulted in a breakout year for the 20-year-old, whose real name is Jimmy Donaldson. Since launching his channel roughly six years ago, Donaldson has amassed 13 million subscribers and 1.6 billion lifetime views.

The first-ever such giveaway video, Donaldson recounts, came via a brand deal with analytics software startup Quid, in which he donated $10,000 to a homeless person. After that clip proved successful, Donaldson subsequently tested out different variations on the theme, including gifting random Twitch streamers tens of thousands of dollars, presenting his mom with $100,000, and purchasing a new car for his stepdad using pennies. More recently, Donaldson threw his support behind the controversial YouTube star PewDiePie with a pricey ad campaign, and pitted other top creators against one another in a $100,000 competition.

After working with Quid on several of the above videos, Donaldson’s second major collaborator was the coupon browser extension Honey—which helped him donate $50,000 to Twitch superstar Ninja in June 2017. While he says that more Honey-sponsored giveaways are in the works, Donaldson now appears to be wealthy enough to shell out generous sums without a partner. For instance, he says, the $100,000 prize for the YouTuber competition came directly from his own bank account.

“If you want to know where [all the money] came from,” he explains, “my parents aren’t rich, I’m only 20 years old, every dollar I’ve ever made came from YouTube—and YouTube just pays better than you think.”

However, even as he touted the lucrative potential of a YouTube career, Donaldson was struggling with demonetization woes with respect to his How I Gave Away $1,000,000 clip—which he complained had been mistakenly flagged by the video giant, and currently appears to be pending an appeal. “I’m pissed the fuck off. Of all the videos you guys demonetize, why this?” he tweeted. “I invest everything I have into my content and pull 10 million views a video, and I still deal with this shit.”

However, an hour later, Donaldson backpedaled slightly. “That was a little dramatic,” he said. “I’ve been stressed out in general lately and I think I’m accidentally letting it all out on YouTube.”