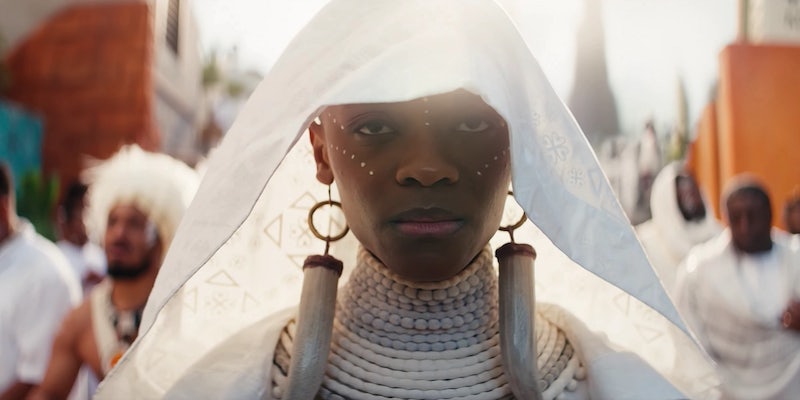 Sincere but overstuffed, this epic sequel balances blockbuster thrills with a thoughtful examination of grief.

With the first Black Panther, Ryan Coogler instantly overshadowed the rest of the MCU, delivering a singular vision with sharp politics and an electrifying lead. The sequel is unavoidably unwieldy by comparison, balancing too many disparate elements: A eulogy for Chadwick Boseman, an entertaining blockbuster, a dramatic international conflict with anti-colonial themes, and an origin story for teen superhero Riri Williams (Dominique Thorne)—a likable Iron Man replacement who should’ve been introduced in her own spinoff.

Opening with the death and funeral of King T’Challa, Wakanda Forever’s greatest strength is its sincerity. The depiction of mourning for T’Challa—and by extension Boseman—is real and messy yet respectful; a far more elegant and thoughtful response than J.J. Abrams’ decision to recycle old footage of Carrie Fisher in The Rise of Skywalker.

With T’Challa’s sister Shuri (Letitia Wright) now in the lead role, we’re left with a story that could only happen under these unique and tragic circumstances. Most obviously, it’s the first big superhero movie to star an ensemble cast of Black women, with Wright, Angela Bassett (T’Challa’s mother Ramonda), Lupita Nyong’o (Nakia) and Danai Gurira (Okoye) receiving more complex and interesting roles than we usually see in this formulaic genre. By comparison, the girlboss feminism of something like Captain Marvel looks embarrassingly flimsy.

Ramonda is the new queen of Wakanda, a position she’s more than qualified to take. Shuri’s future is less certain. Since T’Challa was groomed for the throne, Shuri could always afford to be a little less serious, bringing humor and creativity to the halls of power. But her brother’s death destroyed her belief that any problem can be solved with pure ingenuity. Too stubbornly scientific to accept her mother’s spiritual advice about communing with their ancestors in the afterlife, Shuri is tangled up in rage at the injustice of T’Challa’s passing.

Secure in its power on the international stage, Wakanda’s situation is suddenly complicated by the discovery of more vibranium in the Atlantic ocean—the first sign of Atlantis appearing in the MCU. Ruled by the sometime-supervillain Namor, Atlantis is a long-established piece of Marvel lore, and Coogler’s vision for it is thrillingly original.

Played by Tenoch Huerta, Namor is now an indigenous Mesoamerican demigod, ruling the secret underwater state of Talokan. Like Wakanda, their nation is immensely powerful and entirely untouched by European colonization—and Namor is far more warlike than Wakanda’s rulers. Avoiding (for now) the more histrionic side of his comic book image, Huerta portrays Namor as charismatic and unshakably confident; an intriguing foil for Shuri, who suddenly faces heavy moral choices as one of Wakanda’s leaders.

Things get a little messier outside of this core narrative, however. The American MCU tie-ins are either cringeworthy (Martin Freeman and Julia Louis-Dreyfus as a pair of CIA agents) or needlessly shoehorned into the story (Riri Williams), engendering a sense that Ryan Coogler is having to pay an MCU crossover tax instead of just making the standalone movie Wakanda deserves.

As it stands, the cast is undeniably overstuffed. Not exactly unusual for Marvel. The 161-minute runtime highlights the number of subplots at play, yet you can still see where certain things were simplified to avoid it running even longer. For instance, while Wakanda’s production design and costumes (by the brilliant Ruth Carter) are as gorgeous as ever, Wakanda Forever adds very little to the first film’s afro-futurist worldbuilding, mostly retreading old territory. And while Talokan’s aquatic warriors are very cool, there’s no time to introduce them as distinctive characters like Okoye or M’Baku. We’re left with a rather disjointed mix of powerfully moving scenes about grief and leadership… and run-of-the-mill CGI action sequences where, for instance, Riri Williams debuts her Iron Man suit.

Wakanda Forever‘s flaws still feel more welcome than the typical problems of the MCU. Yes, there’s too much going on and certain characters fall by the wayside. There’s also a clear drop in artistic quality between the vibrant production design of Wakanda and more generic blockbuster material.

Yet the film’s strengths are fundamentally more satisfying and interesting than something like Spider-Man: No Way Home. Wakanda’s mere existence remains an antidote to the interventionist military propaganda of the core Avengers franchise, and Tenoch Huerta embodies a very promising new take on a classic character. Above all, Ryan Coogler is sincerely interested in exploring these characters on a deeper emotional level, giving the main cast something meaningful to work with—even when other elements don’t entirely hold together.