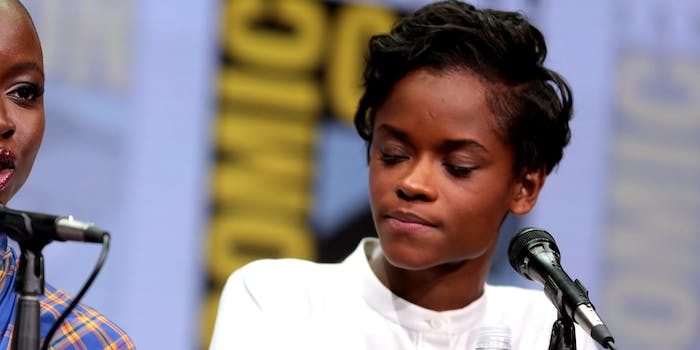 There are concerns that she can't return to the U.S. due to her vaccination status.

Few MCU stars have faced such a drastic change in public opinion as Letitia Wright. Praised for her charming breakout role as Shuri in Black Panther, Wright will receive more screen-time in the sequel, Black Panther: Wakanda Forever. But while her co-stars maintained a relatively low-key presence as filming began, Wright courted controversy by promoting anti-vaccine views. Now, some fans are calling for her role to be recast.

Disney remains characteristically close-mouthed about Wakanda Forever‘s production process, but the latest behind-the-scenes reports are ominous. Wright was injured on set on Aug. 25, and returned to her home in England to recover. Filming continued with scenes that didn’t require Wright’s presence, but the set will officially shut down next week, halting production until the actress returns. According to the Hollywood Reporter, Wright’s vaccination status could be a key problem here.

Wright’s injury was initially described as non-serious, but her two-month absence is worrying. The Hollywood Reporter points out that since Wright is reportedly un-vaccinated, she may not be allowed back into the U.S. As a foreign citizen, she must provide proof of vaccination to enter the country. When this report spread on social media, it seemed to be the last straw for many Black Panther fans.

Wright’s last social media post was a month ago, denying that she was spreading anti-vax messages on the Black Panther set—but pointedly not endorsing the COVID-19 vaccine. This was interpreted as a tacit admission that she’s still opposed to vaccination. On Nov. 5, her representatives shared a new statement saying that she’s “looking forward to returning to work early 2022,” with no further comments on her vaccine status. (The Daily Dot has reached out to her reps for clarification.)

Realistically speaking, Shuri will not be recast for Black Panther: Wakanda Forever. The film has been in production since June, and is still on schedule to come out in November 2022. However the backlash against Letitia Wright spells trouble for Wakanda Forever‘s publicity tour, where the cast and director will have to dodge awkward questions about her vaccination status.

As many Marvel fans have pointed out, Shuri is meant to be a scientific genius, explicitly marketed as a role model to young girls. This clashes with Wright’s current public image, since she’s been accused of spreading conspiracy theories and potentially endangering her coworkers by remaining unvaccinated.