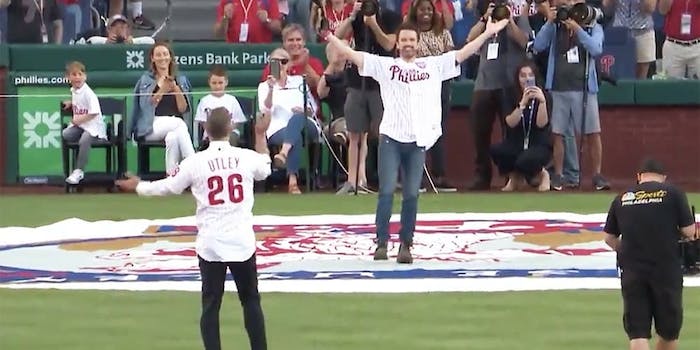 'I'm sure our relationship would be a real home run!'

A dream came true for Mac from It’s Always Sunny in Philadelphia: He finally got to play catch with Chase Utley.

The Philadelphia Phillies held a retirement celebration for longtime former second basemen Utley on Friday night. Utley played for the Phillies from 2003 to 2015 and helped the team win a World Series in 2008. He officially retired from the sport last September after spending the final three years of his career with the Los Angeles Dodgers.

It wouldn’t have been a proper celebration without It’s Always Sunny in Philadelphia creator (and native Philadelphian) Rob McElhenney in attendance. McElhenney plays Mac in the series.

Both McElhenney and his wife Kaitlin Olson (Deandra “Dee” Reynolds) were seated right behind home plate in the soldout stadium. When it came time for Utley to throw out the first ceremonial ball, McElhenney joined him on the field to catch it. McElhenney’s jersey even had Mac written on it.

Mac finally had his catch with Chase Utley.

As fans of the long-running sitcom are aware, Mac and Utley playing catch is a decade-long dream in the making. The character’s obsession with Utley was first revealed in the fifth season, 2009 episode of It’s Always Sunny, “The World Series Defense.”

In the episode, the gang is forced to explain to a judge why they racked up over $1,000 in parking fines, after getting accidentally locked in a linen closet trying to break into Citizens Bank Park for game five of the World Series.

In one of the more memorable scenes, Mac tries to convince Dee to run out onto the field and deliver a “love letter” to Utley.

“Dear Chase, I feel like I can call you Chase because you and me are so alike,” he wrote in the letter, as read aloud by Dee. “I’d like to meet you one day, it would be great to have a catch. I know I can’t throw as fast as you but I think you’d be impressed with my speed … I hope you write back this time, and we can become good friends. I am sure our relationship would be a real home run!”

The letter became such a thing, that in 2013, Utley finally responded in a Phillies Mailbag segment.

In the video, Utley apologizes for taking five years to write back. He’s just “really busy, playing a lot of baseball for the Phillies.”

Suffice to say, fans (of both the sports and the series) were extremely excited for this full circle moment, as made evident by its reception on Twitter.

Rob McElhenney and Kaitlin Olson – Mac and Dee from It's Always Sunny in Philadelphia -are seated behind home plate for Chase Utley's retirement ceremony. Maybe Mac has another letter for Utley.

The only thing missing from the special night was an appearance from Green Man. At least the “Phrenetic” was there!