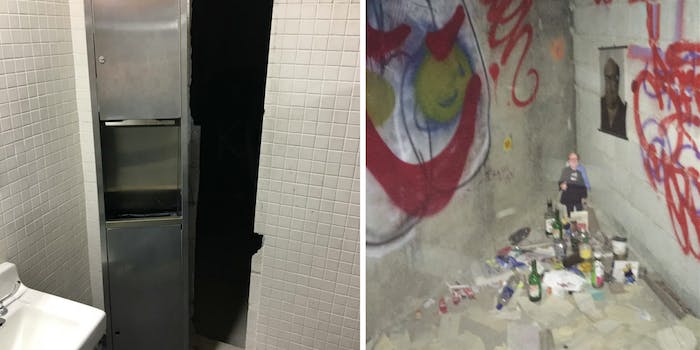 Twitter is very creeped out by this Danny DeVito bathroom shrine

What’s weirder than Danny DeVito? A shrine to Danny DeVito. In a bathroom. Behind a paper towel dispenser. Honestly, no words do it justice. You’ve got to see it to believe it’s not some punchline to an It’s Always Sunny in Philadelphia joke.

the best thing about my school is the danny devito shrine hidden behind the paper towel dispenser in one of the bathrooms pic.twitter.com/3jFe0V9eK6

Twitter user Evan @slackerdook recently decided to investigate a rumor he’d been hearing for weeks at his college, the State University of New York at Purchase. Evan is a sophomore there, and he’d heard tales about a room concealed behind the walls of the boy’s bathroom like something out of a Harry Potter novel.

“I totally thought people were joking or at least thought it wasn’t so hidden,” he told the Daily Dot.

A couple of friends led him to the secret shrine Tuesday to prove it was real, and he shared his amazing findings on Twitter. In a forgotten room behind the paper towel dispenser, tucked into the corner, lies no Chamber of Secrets but instead several pictures depicting the actor of Erin Brockovich and It’s Always Sunny in Philadelphia fame.

Several other students had already left a hodgepodge of offerings to DeVito: a couple of beer bottles, some candy wrappers, a whoopee cushion, and a pocket Bible.

Evan estimated the whole space to be only 8- by 20-feet; he and his friends had to walk sideways to get in. Some students think it’s been there for at least a year, though how it escaped the notice of janitors for so long is anybody’s guess (unless they’re simply too devoted to disturb such a spirited alter).

Good God, it must stay forever

Nobody must let this great thing cease to exist

Take the left path when you reach the fork in the road and it'll take you to Narnia, lol

Evan’s post also encouraged at least one other student at the school to investigate the shrine themselves.

Apparently, the DeVito tapestry featured in the alter is a popular Amazon item, as several commenters shared images of their copies.

Omg I have that same mini tapestry over my mirrors pic.twitter.com/Wwk7weM1Yp

Our Devito, found in the history class pic.twitter.com/NdHesjLCs3

To some DeVito fans, it could rank among the best things to find in a bathroom. To everybody else, it’s among the most terrifying. And at least one Twitter user regretted the shrine’s outing for entirely different reasons.

Actually now that I think about it, way to narc a perfectly good place to smoke weed at school