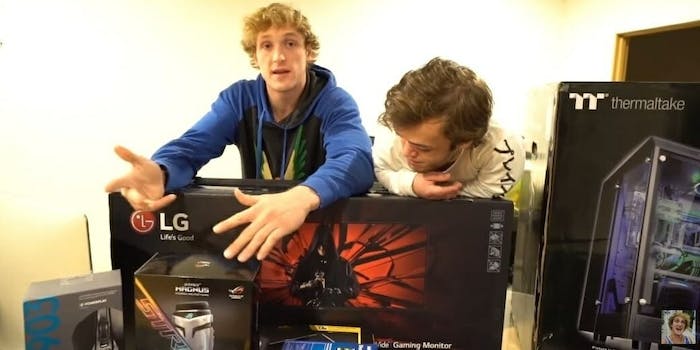 'Dear, Logan Paul. Keep your toxic a** on YouTube. Sincerely, Everyone on Twitch.'

Logan Paul has zero videos posted on his Twitch account. The YouTube star who’s built his following on that platform to 17 million subscribers is certainly not a gamer, and it’s possible that until recently, he had never played (or heard of) Fortnight, the battle royale survival game that’s taken over the gaming community in recent months.

Yet as of Friday, he’d already gained more than 325,000 subscribers on his channel, @LoganPaulWasTaken. He’s gained nearly as many critics.

Fortnight is a cultural force. Paul and his brother, Jake Paul, have recently begun producing YouTube vlogs about the game, and this week, Logan Paul joined Twitch so he could begin streaming himself while playing.

Despite their neverending spate of controversies—from Logan Paul posting a video that featured a dead body hanging in a Japanese “suicide forest” to Jake Paul’s alleged bullying and racism—it’s not surprising that the YouTube brothers are trying to cash in on the Fortnight trend.

It’s been well established that the most famous gamer on Twitch, Ninja, is earning between $500,000-$1 million per month playing Fortnight on the platform, and after Drake joined Ninja to play together this month, the game has never been more popular.

In vlogs posted this week, Logan Paul showed himself buying new gaming equipment and talked about how his Twitch username came to be (it’s truy because @LoganPaul was already taken), while Jake Paul announced the creation of Team 10 Gaming, an offshoot of his Team 10 squad that spends its days vlogging at Paul’s California mansion.

Logan Paul, especially, has managed to infuriate a number of Twitch users, because of his propensity for finding trouble and for potentially damaging the community as a whole.

Sincerely,
Everyone on Twitch.

No, I don't. I feel if you're doing enough to get demonotized on youtube, then we likely don't have space for you on twitch, which is already becoming pretty rank with offensive memes and harassment.

.@Twitch: please carefully think about allowing Logan Paul a place on our platform.

Consider the future of Twitch and what path you want it to take.

Logan Paul is coming to Twitch, alright everyone, time to find a new streaming platform. Our current one is tainted.

I've seen some obvious bullshit in my life but this isn't even trying to be subtle.

Their ire is understandable. Even after he posted the “suicide forest” video and then asked for forgiveness from the YouTube community, Paul has caused controversy by tweeting favorably about swallowing Tide Pods and by tazing a dead rat in one of his vlogs.

As GameRant notes, Paul hasn’t violated any of Twitch’s community guidelines yet—remember, he hasn’t posted anything either—but “Twitch may be quick to suspend Paul’s account at the first sight of questionable behavior to show that it will be stricter with the controversial YouTuber.”

Jake Paul further infuriated some in the community when he recently posted a video titled “I Donated $200K To My Fav Twitch Streamer” with a thumbnail that included a photo of Ninja’s face when Paul, in fact, didn’t discuss Ninja at all in his vlog.

Later, Ninja responded by saying, via Kotaku, “This person is very wealthy, and does not need to do these things for views. [Jake Paul] isn’t stupid and is getting what he wants, which is people to talk about it. …You’re getting baited, and you’re letting it happen.”

Not everybody is upset with Logan Paul’s arrival, though. Ultimately, some feel Paul will bring more mainstream exposure to the Twitch platform, and though some longtime users undoubtedly will hate that idea, more people watching the livestreams could be good for business for those who are already well-established on the platform.

I don’t think ppl should be upset at all about Logan Paul on Twitch. The amount of ppl he can bring over from YouTube can only be a good thing for the site and has potential of some of those ppl staying and lurking other channels. Use your business mind on this one dudes :]

Everybody has their own opinion on @LoganPaul & him gaming, but I'm already meeting new people that are coming over to my stream from my comments on LP-related videos. Regardless of your opinion of him, warm welcome to all of the new @Twitch viewers. You're going to love it here.

As Polygon notes, some long-time Twitch users are referring to the influx of new influencers and the fans they bring as the “normie invasion.”

As Clint Stevens, who has 203,000 followers on Twitch, said this week, “Normies are the thing you want most on Twitch. They’re the people that you turn into your dedicated people that watch. You need to get those normies, because eventually, the dedicated people are going to get jobs, they’re going to get families, they’re going to get people who love them, and then they’re not going to watch you anymore. Everybody goes around from game to game, striking the ground, trying to find the vein; the oil vein of the normies. They just walk around and eventually … a game like Fortnite comes out and, Oh my god, they just burst out of the fucking ground like a fucking firehose.”

Ultimately, it’s difficult to tell what kind of Twitch user Logan Paul will become. Will he be toxic? Will he be an entertaining streamer? Will he be on his best behavior? Or will he help bring down the platform?

As Paul has said, “My first stream is going to be so lit.” For many Twitch users, that’s exactly what worries them.