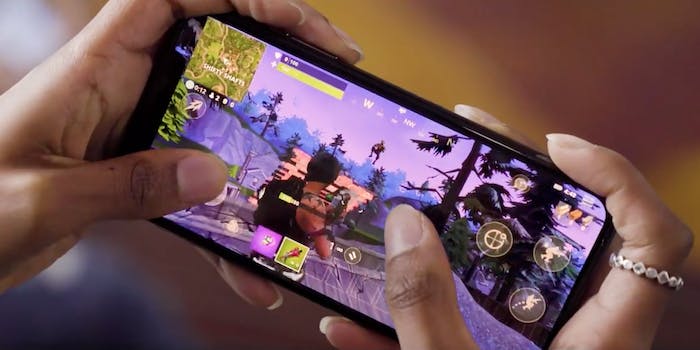 Everything you need to know to play Fortnite on mobile

Fortnite, the most popular game on the planet, is coming to your pocket.

Listen up, iPhone and Android gamers. Fortnite: Battle Royale is coming to mobile. The game everyone’s talking about, the game that recently toppled PlayerUnknown’s Battlegrounds on Twitch, is coming to your phone. And your tablet. With some caveats.

But enough with the niceties. Let’s dig into everything you need to know to play Fortnite on mobile.

In case you haven’t hopped on the Fortnite train yet, here’s a rundown. It’s an online multiplayer game for computers and consoles that revolves around shooting people and building things. While it does have a paid cooperative mode, most people play the free Battle Royale mode. That’s the mode that’s coming to mobile.

In it, 100 players parachute onto a sizable, cartoonish island that’s filled with trees, buildings, lakes, and the like. All you start with is a pickaxe that doesn’t deal much damage. But it does chop things up in the environment to get you resources like wood, metal, and bricks. Using these resources, you can build structures, Minecraft-style. Assemble a few walls, ceilings, and staircases, and you’ll be able to better defend yourself from enemies.

Speaking of enemies, you’ll also want to root around in buildings to find things like weapons, ammo, and shield potions. The weapons come in various levels of rarity that also correspond to how powerful they are. (Hint: Pick up any Legendary weapons you find.)

As you go about collecting things, a storm encloses on the island. As it nears, you have a limited amount of time to make it into a shrinking circle of non-stormy real estate. This helps funnel everyone into the same space, where they can use their weapons to try to kill one another. The goal is to be the last player or team left standing.

How is Fortnite different on mobile?

Does it have cross-play?

The only divide that exists is between Xbox One and PS4. With Sony and Microsoft being such close competitors, cross-play between those systems may never happen.

How do you get Fortnite on mobile?

Downloading most mobile games is as simple as finding them in an app store and pressing the download button. For Fortnite: Battle Royale, it’s not quite so simple—at least for now.

Instead of launching the game on mobile all at once, publisher Epic Games is doing a staggered release. If you have a recent iOS device, you can sign up for an email invite right here. Just create an Epic Games account, sign up, and twiddle your thumbs until further notice.

Epic is letting players into the game in batches. When you receive your email, you’ll get a link to download it from the App Store. (Just watch out for fake links.) As for how long it will take to receive your code, it’s still pretty up in the air. Presumably, the speed of the rollout will depend on how smoothly everything goes once mobile players start parachuting into live games.

What devices will it run on?

Since this is a full PC and console game, it requires a device with a certain amount of horsepower. To that end, you’ll need at least an iPhone 6S/SE, iPad Mini 4, iPad Air 2, iPad 2017, iPad Pro or newer. And don’t even think about trying to play without iOS 11 installed on your device. On older software and hardware, the game won’t run.

Right now, only iOS users can sign up. Epic Games says Android support will arrive “in the next few months.” It’s unclear which Android devices will be able to run it, but presumably, it will also be restricted to devices from the past two or three years.