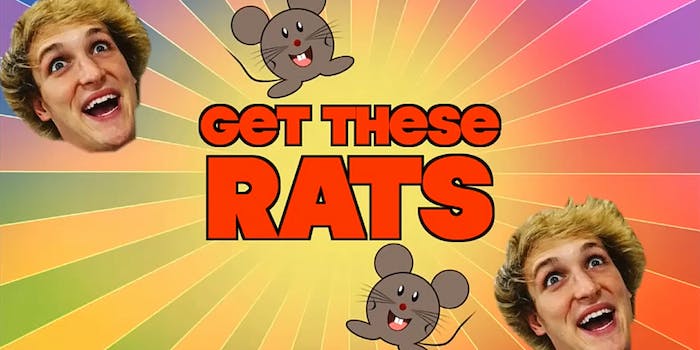 Logan Paul tasered a dead rat on YouTube this week, and PETA wants the video banned from the site.

The video, a back-to-business prank antic from the Jackass-like social media comedian, drew the ire of the animal rights group Tuesday evening. Paul was at the center of an international controversy in January when he filmed an apparently dead body in Japan’s suicide forest for his YouTube comedy channel. Despite a remorseful comeback tour, Paul’s brash comedy is back on.

“This sort of content has no place on YouTube or anywhere else, as it could desensitize young people to cruelty to animals,” PETA Senior Vice President Lisa Lange told TMZ. “PETA is calling on the platform to remove it.”

While one can see how hurting even dead animals might inspire young minds, as Paul’s fans would note, the star must like (living) animals because he regularly features his pet dog and parrot on his show and is clearly affectionate toward them. Similarly, the vlog features Paul visibly distraught over the near-death of a fish in his coy pond.

It’s all from a video in which he challenges another YouTube star to fight his dad.

Paul posted two other videos this week: A “man on the street” gag where he asks students what they think about him, undercover, and a vlog about the day he says his parachute didn’t open.

For his part, Paul seems confused by the recent flurry of tabloid attention.

what is my life pic.twitter.com/00w72f5aGB