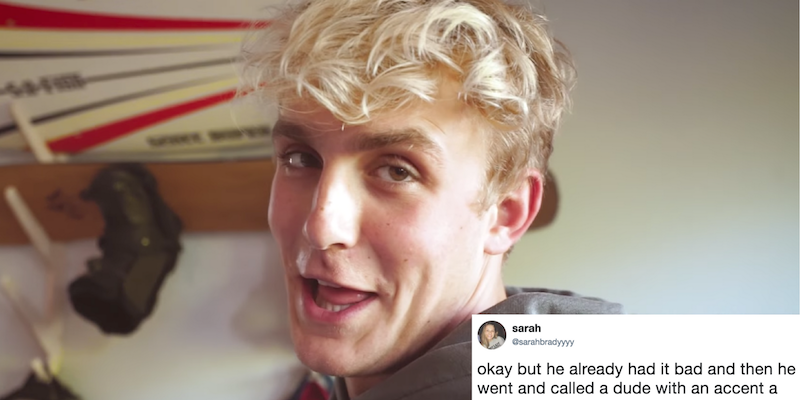 Jake Paul jokes that fan from Kazakhstan is a terrorist, internet properly drags him

How long can Paul keep the haters at bay?

YouTuber and former Vine-turned-Disney star Jake Paul is huge into “dabbing” on the haters. However, he might have a hard time blissfully ignoring critics who’ve taken issue with racist comments he made in a recent vlog, and they’ve subsequently drug up other racist comments he’s made on social media.

Last month, Paul gained notoriety for making the lives of his neighbors a living hell, and shortly after he was let go from his show on the Disney Channel. Last Tuesday, Paul published a vlog on YouTube in which he took his Tesla through a fast food drive-thru on self-driving mode and hid in the back of the car as a prank. However, during filming Paul and his team were approached by a fan born in Kazakhstan.

After the fan tells Paul where he’s from, Paul replies, “It sounds like you’re just gonna blow someone up … You’re like, ‘send nuke.'” Paul may have been referencing the meme “send nukes” that plays on the phrase “send nudes.” You can watch the encounter in the video below beginning at 11:39:

The following day, the ignorant exchange was decried by critics taking issue with how Paul made a racist joke profiling a fan with an accent as a terrorist. Using the hashtag #JakePaulIsOverParty, Paul’s haters bashed his comments and encouraged others to stop supporting and qualifying his actions.

This dude legit look like the thumb people from spy kids #jakepaulisoverparty pic.twitter.com/kdEmIplk1i

reporting live from the team 10 house. with a question. why?! go home. #jakepaulisoverparty @jakepaul pic.twitter.com/cUhNiN49z5

Despite dissenters taking issue with Paul’s present-day comments, others originally pushed for the “Jake Paul is over party” when news of his neighbor’s complaints surfaced last month. One dedicated critic even resurfaced old tweets from Paul revealing previous racist and homophobic comments he made in 2012.

A search for these tweets reveal they’ve since been deleted. Paul would have been 15 years old at the time he tweeted these comments and didn’t begin his stint on Vine until 2013. Though the context of his comments don’t excuse his behavior, it does make the case that Paul shared these messages before becoming a public figure.

Paul did not immediately reply to a Daily Dot request for comment.