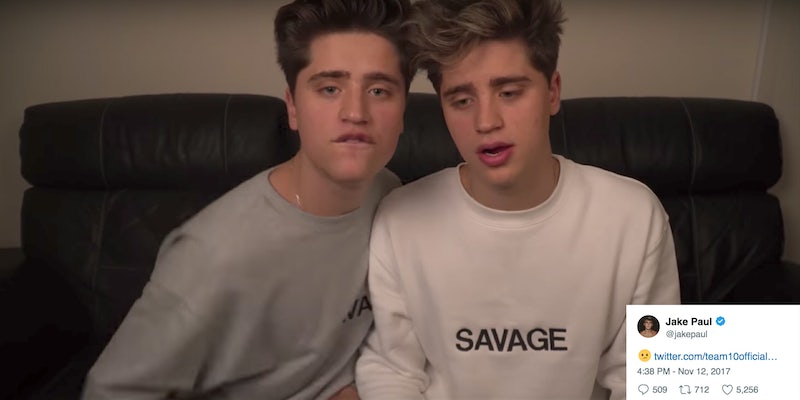 The brothers say they were bullied 'every single day.'

All is not well in the house Jake Paul built.

Popular YouTubers Ivan and Emilio Martinez, also known as the Martinez twins, explained in a video for their more than 3.5 million YouTube followers on Sunday that they’d decided to part ways with Paul and Team 10, Paul’s social media incubator house, and made allegations about behind-the-scenes factors at play.

Now, Team 10 has denied the allegations, describing the split as heartbreaking and literally unbelievable.

The twins―natives of Spain―allege that they were the victims of taunting “every single day” while living with Team 10 in Los Angeles.

“Imagine you, little kid from Spain, from another part of this world, you go to L.A., you don’t even talk English,” Emilio says in the video. “You go to somewhere that no one talks Spanish or your language, and you see people in the house laughing, and you don’t even know what they’re talking about, then you find out they were talking bullshit about you, laughing about you, every single day.”

Paul tweeted out an official statement from Team 10 in response to the Martinez twins on Sunday, saying what the brothers alleged in their video “simply isn’t true.” The statement also refers to Paul having given Ivan and Emilio “opportunity to help themselves and their family” and warned that the public split will be exploited by social media and YouTube “for clickbait and views.”

Paul himself has not yet responded at any greater length about the situation, beyond what’s contained in the official statement, and a slightly frowning emoji he tweeted out alongside it.

The Martinez twins initially joined Team 10 back in January of this year, and their departure has been a subject of conversation for months, following an Aug. 1 video they uploaded titled “We Left The Team 10 House Forever.” This was not, in other words, an entirely unexpected falling out, but the related accusations of bullying are clearly causing a stir.