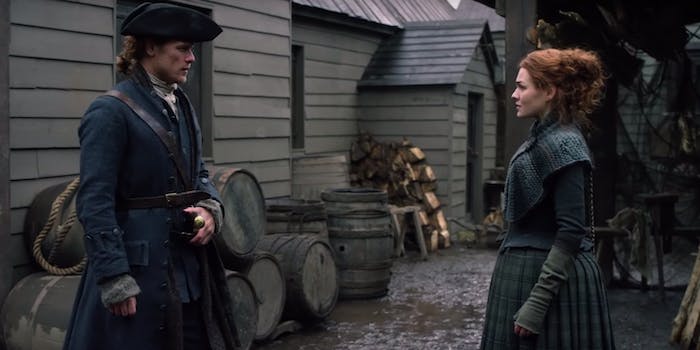 ‘Outlander’ is finally coming to Netflix next month

The first two seasons of the steamy historical drama hit Netflix at the end of May.

Shh, do you hear that? It’s the ecstatic cries of millions of Netflix subscribers after they learned that Outlander is coming to the service next month—or at least, part of it.

The historical time-travel drama based on Diana Gabaldon’s book series of the same name stole hearts when it debuted on Starz back in 2014. Since then, Outlander has developed a massive online following thanks to its savvy blend of historical drama, romance, fantasy, and adventure.

For the uninitiated, here’s why fans are stoked to watch Outlander on Netflix next month.

Outlander stars Caitriona Balfe as Claire Randall, a World War II nurse who travels from 1946 back to 18th century Scotland, where she meets a group of rebel Highlanders, including the hunky Jamie Fraser (Sam Heughan). The two fall in love and get married, which is great—except that Claire already has a husband back in her own time period.

The show had a strong debut, with its first eight episodes averaging more than 5 million viewers. Outlander gained a vocal online fanbase and boosted Starz’s status, helping it to compete with similar premium cable networks. But pretty soon, Outlander fans won’t have to rely on Starz to watch the show.

Is Outlander on Netflix?

Netflix subscribers, rejoice: The first two seasons of Outlander are coming to the platform on May 27. It’s just enough to let fans revel in some early series highlights while giving newcomers something to sink their teeth into.

Netflix broke the news with a questionable joke tweet on Monday.

Other ways to watch Outlander online

You can still watch Outlander on Starz, provided you have a subscription. You can also rent the series on several other platforms, including Google Play, YouTube, iTunes, and Amazon Prime. Still, if you’re looking for the most cost-effective way to stream Outlander, your best bet is Netflix or a Starz subscription. All four seasons are available on the latter, which you can revisit in preparation for the show’s upcoming fifth and sixth seasons.

It’s also worth noting that you can add Starz as a premium channel to several live TV streaming services, including Sling TV, Hulu and Hulu with Live TV, and YouTube TV.

The Starz catalog is underrated. Just check our guide to the best 2018 movies on Starz. For $8.99 per month, you’ll not only get all of the Outlander you can handle, but also other noteworthy original series like American Gods.

If convenience is key, consider adding Starz as an Amazon Prime channel. Streaming doesn’t get much easier than that, and you’ll still get full access to Starz’s on-demand catalog.