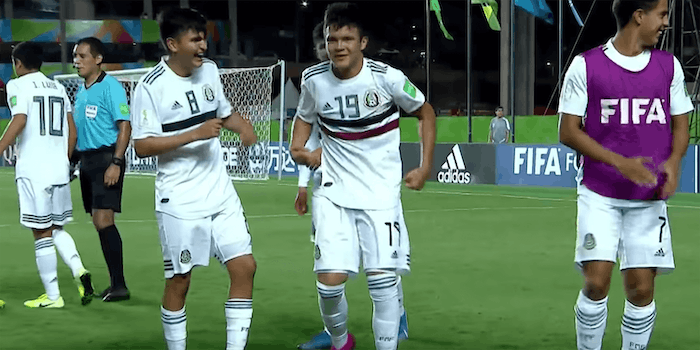 How to stream Mexico vs. Netherlands in the U-17 World Cup semis

Can El Tri muscle into the final?

It’s down to the final four teams in the U-17 World Cup, and Mexico’s one of the advancing teams, on the strength of a 1-0 win over South Korea. If it gets past the Netherlands on Thursday, El Tri faces the winner of the France-Brazil matchup

Here’s everything you need to know to stream Mexico vs. the Netherlands in the World Cup semifinals

Mexico vs. the Netherlands stream

Mexico vs. the Netherlands live stream: How to watch U-17 World Cup matches

The match is on FS2 and Telemundo; these streaming services provide fans the opportunity to catch all the U-17 World Cup tournament action.

Mexico vs. the Netherlands: What the watch for in the U-17 World Cup

Mexico and Netherlands have quite the soccer rivalry, including the 2014 World Cup matchup in which Arjen Robben was fouled/dove (depending on your point of view) to allow the Dutch a stoppage-time penalty kick to complete a dramatic/totally unfair (again, depending on your point of view) comeback. Both nations have strong youth movements which their fans are hoping will help some recent senior team disappointments; in the 2018 World Cup, Mexico crashed out in the round of 16 yet again, and the Netherlands didn’t make it at all.

Mexico got to the semis by beating South Korea 1-0 this past Sunday, with Ali Avila Vega providing the difference-maker late in the second half. The Netherlands had an easier time of it, blowing past Paraguay 4-1 in its quarterfinal matchup, with four different goal-scorers helping the Europeans advance past the South Americans.