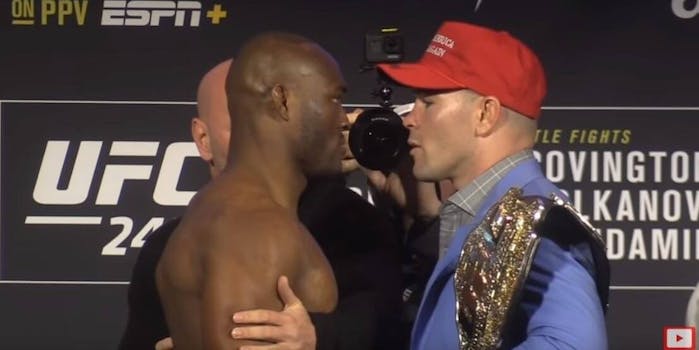 How to stream Kamaru Usman vs. Colby Covington in UFC 245

This fight is for the UFC welterweight title, but that's only one storyline.

Rarely has an MMA fight—which you can stream on ESPN+—been so loaded with social resonance, so weighed down with meaning.

Anyway, that’s what Usman and Covington and the UFC would like you to believe. They know nothing sells like the culture wars. Or rather they’ve learned it over time. Before Covington’s rebranding as an alt-right rabble-rouser, he was just another mild-mannered wrestler quietly toiling away on the middle rungs of the welterweight division, a bland innocent with a flattop. And before Usman declared himself the defender of all immigrants in the Age of Trump, he was an unassuming fighter with stifling wrestling skills but little fan attention.

Both fighters were mostly forgettable.

And if their respective transformations had never happened, the UFC would have been stuck promoting a championship fight that barely generated interest inside the MMA world, much less outside of it. The UFC’s marketing team would have had trouble convincing fans that such a match, sure to lean heavily on ground-fighting and plodding work against the cage, deserved to headline the last major event of the decade, or that they should spend $80 to watch it on pay-per-view.

Which makes Saturday night’s main event a masterpiece of rebranding and mythmaking by everyone involved. Particularly Covington. As an accomplished athlete sitting at home wondering why no one was paying attention to him and why his paychecks were so small, it’s hard to fault him for making up a controversial new persona, something fans wouldn’t be able to look away from, even if it meant they hated him.

Of course, one has to ask if there wasn’t a slightly different path he could have chosen, something not quite so poisonous. But to hear Covington tell it, that he’s in the UFC at all, much less competing for a title, is proof of the power of poison. Earlier this week he claimed he was on the verge of being let go by the UFC before he made his now-infamous post-fight speech in October 2017 in Sao Paulo, Brazil, the one in which he called Brazilians “dirty animals” and announced himself as the UFC’s resident racist. Before that moment, the promotion didn’t see him as its resident anything, despite his success inside the Octagon. He was just another name on the roster.

Afterward, Covington swears, UFC couldn’t wait to give him a new contract. But that could just be more Covington bombast and mythmaking. Either way, Covington got his wish. On ESPN+, hundreds of thousands will pay hard-earned money in the hopes of seeing him lose. Which he won’t, no matter what happens between him and Usman. In the fight game, the self-promotion wizard exists somewhere beyond victory and defeat.

Here’s everything you need to know to watch UFC 245 without cable.

UFC 245: How to watch Usman vs. Covington

Thanks to a huge seven-year deal, ESPN+ is now the only way to watch UFC 245 (and all subsequent UFC PPVs). Aside from ESPN+ becoming your one-stop shop for the MMA promotion, the OTT service also offers the UFC PPVs for $5 less than you used to have to pay. Here’s how it breaks down:

In other words, you can buy UFC 245 for $59.99, but if you spend just $20 more, you’ll also receive one year of ESPN+ for free. That’s a $50 value, and if you’re a big MMA fan, that’s a nice deal. Along with plenty of exclusive live events (see below), you can also watch 20 UFC Fight Night events every year with ESPN+.

If you don’t currently subscribe to ESPN+, you can purchase UFC 245 from your desktop or smartphone here. If you already subscribe, you can easily buy the PPV from the ESPN app by simply clicking on the event in the ESPN+ tab.

One thing to remember: Only the UFC 245 main event card will be featured on ESPN+, and you will have to pay the $59.99 PPV fee (full schedule and watch guide below). Here’s the main event card:

ESPN+ is ESPN’s subscription streaming service. It works as an extension of the ESPN app that you probably already have on your mobile device. Have you ever noticed the live events, articles, or series tagged with a gold “E+” in the corner of the app? Those are the ones that are locked behind the ESPN+ paywall. It’s literally thousands of events per year, including the aforementioned 20 UFC Fight Nights and a bunch of exclusive Top Rank boxing events. You’ll also get all of the best 30 for 30 episodes, daily MLB action, every out-of-market MLS game, international soccer matches, and more college sports than you can dream of.

In case you need a reminder: Your ESPN+ subscription will not allow you to watch the ESPN2 prelims for free. You’ll still have to have a cable or live TV subscription to watch it on the network beginning at 8pm ET. Here are the matches you’ll be able to watch on ESPN2:

If you don’t already have a way to watch ESPN2 online, every major live TV streaming service carries the channel, and all of them offer at least a one-week free trial before you have to start paying. Once you download the ESPN app and punch in your credentials, you can watch the prelims and the main event from one convenient location. Here are a few options for you: