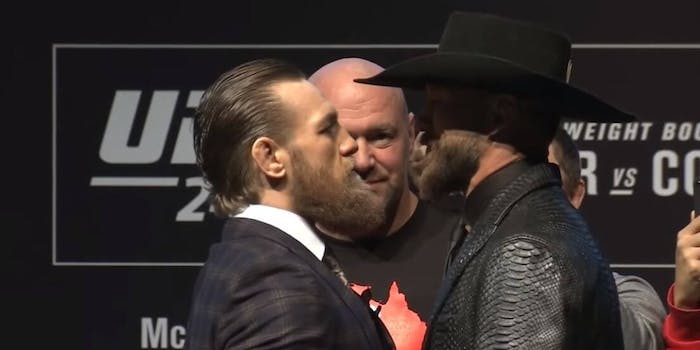 How to stream Conor McGregor vs. Donald ‘Cowboy’ Cerrone in UFC 246

Can the "Cowboy" stand up to McGregor?

Sometimes, amidst all the noise and hoopla leading up to a Conor McGregor fight, you can almost forget an actual fight is going to take place. A single athletic contest pales in the face of such overwhelming promotional madness and media frenzy, all that trash talking and tweeting and Instagram posting and all those long blustering interviews about $80 million paydays and Reebok advertising campaigns. This is especially true when McGregor has been away from MMA, as he was for the last 15 months.

Then his return becomes almost the entire story and the fight merely its occasion. Thank goodness then that Saturday night, after several long weeks of prelude, all that marketing noise will depart the stage at last and leave McGregor and his opponent, Donald Cerrone, alone to do honest work on ESPN+. All the money and whiskey commercials in the world won’t mean a thing then.

When that great moment finally arrives, Cerrone will be forced to face certain ugly truths about himself, truths that have been there throughout his 15-year career but that will be brought into their boldest relief yet by McGregor. Because—no surprise—the UFC is welcoming their rainmaker back by tailor-making a fight for him. There will be no grappling genius waiting to expose McGregor’s flaws, no
unbreakable striker with an iron chin able to cool his resolve. Instead, he’ll get Cerrone, who is a brilliant mixed martial artist but whose tactical frailties and psychological makeup play perfectly to McGregor’s strengths.

Cerrone is a notorious slow starter, for example, while McGregor reacts to the bell like a prisoner released. McGregor is a relentless pressure fighter who delights in breaking others’ wills, and Cerrone, for all his experience, is known to break. Cerrone shrinks from big moments. McGregor was born for them.

But things aren’t hopeless for Cerrone. McGregor has his weaknesses as well. The longer his fights go on and the more grappling heavy they are, the shakier he looks. More than once during his UFC career, McGregor has looked for the exit when a fight turned ugly and exhausting. A smart Cerrone would hammer away at these weaknesses, grabbing onto McGregor and refusing to let go, tiring him out and draining him, rather than going punch for punch. But all indications are that Cerrone the daredevil, the adrenaline junkie, the self-proclaimed “cowboy,” who brazenly flouts any clause in his UFC contract requiring him to stay away from snowmobiles, motorcycles, or jet skis, is having his way with Cerrone the savvy veteran once again. He wants to engage McGregor in a striking contest because that’s the challenge. Something in him can’t resist courting catastrophe.

But while he may be cursed by self-destructive tendencies, Cerrone does have circumstance on his side.

All the pressure is on McGregor to win. He’s the one in the prime of his athletic life, not Cerrone. He’s the one who fought and talked his way into mythic status and tens of millions of dollars. He’s the one who re-created MMA in his image and bent its biggest promotion to his whims. He’s the one whose return to the cage is trumpeted as a major occasion. He’s the cultural icon. McGregor takes the burden of not only his fighting reputation into the cage but countless business relationships built on the myth of his near-indestructibility. If he loses, the foundations of his carefully constructed, highly lucrative world shake. If Cerrone falls, there would be no such shame, and no greater resonance. Win or lose, he’ll walk away from Saturday’s fight as an MMA legend slowly succumbing to the ravages of time who went out a hero by taking on one of the best fighters in the sport. Such a legend might be even more romantic in defeat.

Here’s everything you need to know to watch McGregor vs. Cerrone without cable.

UFC 246: How to watch McGregor vs. Cerrone

Thanks to a huge seven-year deal, ESPN+ is now the only way to watch UFC 246 (and all subsequent UFC PPVs). Aside from ESPN+ becoming your one-stop shop for the MMA promotion, the OTT service also offers the UFC PPVs for $5 less than you used to have to pay. Here’s how it all breaks down:

In other words, you can buy UFC 246 for a one-time price of $59.99, but if you spend just $20 more, you’ll also receive one year of ESPN+ for free. That’s a $50 value, and if you’re a big MMA fan, that’s a nice deal. Along with plenty of exclusive live events (see below), you can also watch plenty of UFC Fight Night events every year with ESPN+.

If you don’t currently subscribe to ESPN+, you can purchase UFC 246 from your desktop or smartphone here. If you already subscribe, you can easily buy the PPV from the ESPN app by simply clicking on the event in the ESPN+ tab.

One thing to remember: Only the UFC 246 main event card will be featured on ESPN+, and you will have to pay the $59.99 PPV fee (full schedule and watch guide below). Here’s the main event card:

ESPN+ is ESPN’s subscription streaming service. It works as an extension of the ESPN app that you probably already have on your mobile device. Have you noticed the live events, articles, or series tagged with a gold “E+” that lives in the corner of the app? Those are the ones that are locked behind the ESPN+ paywall. It’s literally thousands of events per year, including the aforementioned UFC Fight Nights and a bunch of exclusive Top Rank boxing events. You’ll also get all of the best 30 for 30 episodes, daily MLB action, every out-of-market MLS game, international soccer matches, and more college sports than you can dream of.

In case you need a reminder: Your ESPN+ subscription will not allow you to watch the ESPN prelims for free. You’ll still have to have a cable or live TV subscription to watch it on the network beginning at 8pm ET. Here are the matches you’ll be able to watch on ESPN:

If you don’t already have a way to watch ESPN online, every major live TV streaming service carries the channel, and all of them offer at least a one-week free trial before you need to start paying. Once you download the ESPN app and punch in your credentials, you can watch the prelims and the main event from one convenient location. Here are a few options for you: