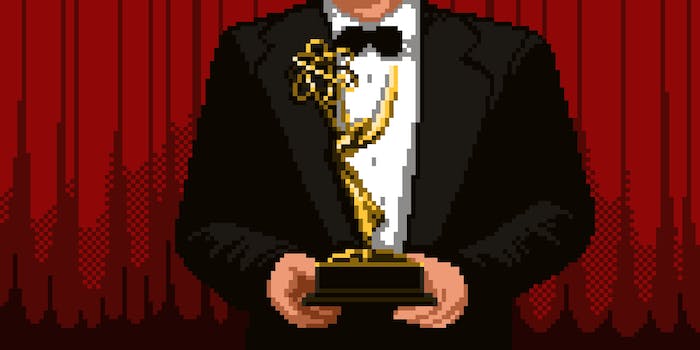 They lost the biggest awards of the night, but their speeches are just as memorable.

After only a few years of being included in the Emmys, streaming services like Netflix and Amazon have already becoming a dominant presence as the two services took home five major awards between them Sunday night.

While Game of Thrones and Veep won the biggest awards of the night, Netflix and Amazon came out with some of the show’s earliest awards—and the winners had some of the Emmys’ most memorable speeches. (This, after grabbing nine combined awards at the Creative Arts Emmys the week before.) Plus, who could forget the kids from Stranger Things handing out sandwiches to the audience?

Master of None writers and co-creators Aziz Ansari and Alan Yang won Outstanding Writing for a Comedy Series for “Parents,” an episode that especially resonated with many children of immigrants. Yang, accepting the award, made an appeal to Hollywood for more diversity and inclusiveness.

“There’s 17 million Asian-Americans in this country and there’s 17 million Italian-Americans,” he said. “They have The Godfather, Goodfellas, Rocky, The Sopranos—we got Long Duk Dong. So we got a long way to go. But I know we can get there. I believe in us. It’s just gonna take a lot of hard work. Asian parents out there, if you can just do me a favor—just a couple of you, get your kids cameras instead of violins, we’ll be all good.”

Alan Yang says of Asian Americans: "We got a long way to go- I know we can get there" https://t.co/j3NFvug9bv #Emmys pic.twitter.com/trq2dDpq4U

“When you take people of color, women, trans people, queer people, as the subjects of stories, you change the world, we found out,” she said. “We found out.”

Soloway ended her speech by thanking the transgender community and called for an end to violence. Before leaving the stage, she jumped and said, “Topple the patriarchy!”

As Jimmy Kimmel predicted at the beginning of the show, Jeffrey Tambor repeated his win for Outstanding Lead Actor in a Comedy Series, and as he did last year, he thanked the transgender community. This year, after trans creators highlighted the issues with hiring cisgender men to play transgender women in film, Tambor also called upon Hollywood to hire transgender talent for their productions and said that he “would be happy if I were the last cisgender male to play a transgender female.”

“Listen to me, I’m not gonna say this beautifully, but to you people out there, you producers and network owners and you agents and you creative sparks, please give transgender talent a chance,” he said. “Give them auditions. Give them their story.”

Laverne Cox echoed Tambor’s call later in the show, but Jen Richards, a transgender actress who was nominated for an Emmy this year, said that “the moment will culminate with actual trans actors, writers, directors walking those stages.”

And then I watched @jeffreytambor tell Hollywood to hire trans people, and say he hoped he was the last cis man to play a trans woman…

I know well the pace of institutional change. That moment was 40+ years in the making, due to work of countless people. But it's here now.

And yes, the moment will culminate with actual trans actors, writers, directors walking those stages. This moment is only beginning.

Later on, Patton Oswalt won Best Writing for a Variety Special for his Netflix standup special Patton Oswalt: Talking for Clapping. In his acceptance speech, he paid tribute to his wife, true-crime author Michelle McNamara, who died earlier this year and whom he credits with “every bit of growth that I’ve had in my career.”

“I want to share this with two people,” Oswalt said. “My daughter, Alice, who is waiting at home. And the other one is waiting somewhere else, I hope.”

While Ben Mendelsohn won Best Supporting Actor in a Drama Series for the recently canceled Bloodline, he didn’t attend—but at least that spared him from Kimmel’s ribbing.

Streaming services are now a familiar presence at the Emmys, but they’re still waiting the day when the best show on television isn’t physically airing on television.