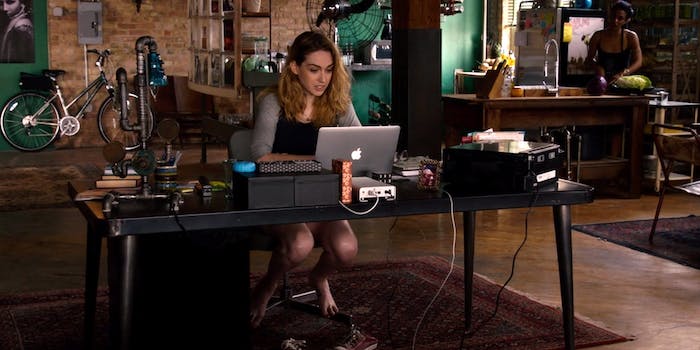 Trans actors and writers had much to say about the controversial castings on Twitter.

I really hope you both choose to do some actual good for the trans community one day. @MRodOfficial @MattBomer https://t.co/9WHwNu7HFm

Clayton’s statement came on the heels of a Medium post she retweeted—trans writer Emily Maxima’s “Making movies with transgender protagonists is not, on its own, progress.” The article emphasized the lauding of cisgender actors who play transgender characters in film and television, stating that what Hollywood cites as progress is actually “cheap opportunism.”

“Society sees us through the stories that Hollywood tells,” wrote Maxima. “It is because of this impact that producers should at least try to make movies as authentic as possible by consulting transgender writers and using transgender actors whenever possible.”

Clayton’s calling-out of Rodriguez and Bomer was hardly an unusual stance in the transgender community—which has been expressing a certain amount of jaded horror at Rodriguez’s casting in the upcoming film (Re)Assignment, in which she plays the victim of a nonconsensual gender-reassignment surgery.

Bomer’s addition to Hollywood’s trans-face problem came when his role as a transgender woman in the new film Anything was announced.

While both Bomer and Rodriguez are openly LGBT (that, at least, is a form of progress), neither are transgender—and their casting in trans roles is seen as an obstacle for trans actors trying to make it in Hollywood.

Clayton’s sharp words caused Bomer to block—and later unblock—her on Twitter, but they also instigated a social media conversation about transgender people in film and television and what exactly defines “progress.”

It's sad that this happens instead of wanting to have a conversation about how to help. #transisbeautiful @MattBomer pic.twitter.com/k4Qpap5dLW

Tweeps! @MattBomer unblocked me. That's rad & Twitter is rad for creating a space for our thoughts. I loved reading yours. #transisbeautiful

Emmy-nominated transgender actress Jen Richards (Her Story, I Am Cait) weighed in with a dozen tweets explaining that she had auditioned for a role in Anything, along with other transgender performers. Richards spoke out on Twitter about the process of navigating casting as a transgender actor, and how often men are chosen to play trans women because of pervasive stereotypes about what trans women “should” look like in films.

I auditioned for this. I told them they shouldn't have a cis man play a trans woman. They didn't care. https://t.co/T7YFe6OeX9

Having trans people play trans people allows for more informed, subtle, authentic performance. It makes for BETTER ART, which is the point.

Eddie Redmayne, Jeffrey Tambor, Jared Leto, etc., are great actors, but we, and those who know us, see the difference between them & us.

When @MattBomer plays a trans sex worker, he is telling the world that underneath it all, trans women like me are still really just men.

For those new to this convo: @angelicaross @tracelysette @rainvaldez & I have all lost trans roles because we "don't look trans enough." Yep

While Bomer and Rodriguez remain at the center of the controversy around transgender acting roles, some Twitter users posted that the problem was in the hands of directors and casting agents—not actors.

Bomer’s own Twitter did not include any statements about the controversy. Rodriguez responded to questions about her role as Frank Kitchen in (Re)Assignment last November, when TMZ stopped her on the street to ask whether the portrayal might do harm to the transgender community.

“I remember a day when white people were playing black people,” said Rodriguez in the TMZ video. “So it’s just about the evolution. Thank Kris Jenner [sic] for becoming who he became, and now you have a popular subject matter that nobody wanted to make a movie about and now everybody’s on it.”