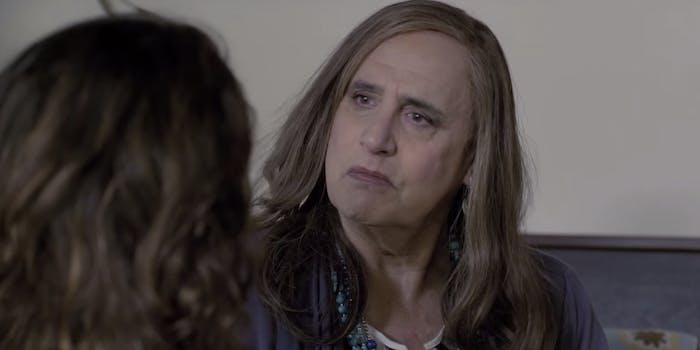 'Transparent' and 'Orange Is The New Black' stand out.

It was a banner year for Web-based prestige TV, with 46 nominations between them for shows like Transparent, Unbreakable Kimmy Schmidt, House of Cards, and Orange Is the New Black. Netflix’s 34 nominations led the pack, and Amazon garnered the remaining 12.

Outstanding supporting actress in a drama series went to Orange Is the New Black‘s Uzo Aduba. She won her second Emmy in a row for her role as inmate Suzanne “Crazy Eyes” Warren.

Transparent, which made history at the Golden Globes by winning best TV series, a first for Amazon, was up for the Emmy on Sunday, facing off against Netflix’s Unbreakable Kimmy Schmidt. HBO’s Veep would take home the hardware, however.

Netflix’s Lily Tomlin was up for best actress in a comedy series for Grace and Frankie. (Julia Louis-Dreyfus would win for Veep).

In the supporting categories, Tituss Burgess was nominated for his role on Unbreakable Kimmy Schmidt, (Tony Hale would set the tone for Veep‘s dominating night with an early win), while Jane Krakowski and Gaby Hoffman were both nominated for supporting actress representing Unbreakable Kimmy Schmidt and Transparent, respectively. (Allison Janney from CBS’s Mom would claim this category.)

In the drama category, Netflix faced off against itself for outstanding series, with Orange Is the New Black and House of Cards both nominated. Both would yield the award to cultural force Game of Thrones.

Prior to Sunday’s event, Transparent, House of Cards, and Virunga took home awards at the Creative Arts Emmys. Transparent won the awards for outstanding main title theme music and outstanding costumes for a contemporary series, while actor Bradley Whitford won for his guest actor appearance in the series.