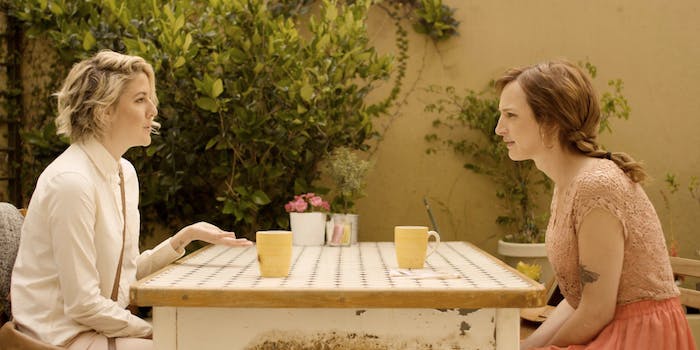 The scrappy YouTube series just pulled off a major coup.

That’s the feeling expressed by the two co-creators of a little-known streaming webseries on Thursday after discovering that the show had received an Emmy nomination.

Her Story, the YouTube webseries about transgender women that features a rare trans-lesbian relationship, received its first nomination. The Emmy nod in the short-form category was a victory on multiple levels: for streaming content, for the first show with a nearly an all-trans cast and crew, and for a show that aired on YouTube without any studio or corporate backing whatsoever.

Series co-creator Jen Richards, who also stars in the show, told the Daily Dot on Thursday that she got the news just before dazedly heading to a casting.

“I felt kind of stunned more than anything else,” said Richards by phone. “It’s just unreal, and it’s enhanced by the fact that we’re such an outlier in the category. I was like…how?”

Her Story hasn’t just broken barriers due to the makeup of its cast and crew—largely queer and transgender women—but also because its low-budget, basically volunteer-run production. The series was crowdfunded on Indiegogo, where it raised $37,875 in September—a tiny budget millions of dollars less than most Emmy-nominated network television shows.

“From the beginning when we were producing this, an Emmy was never in the realm of things to hope for,” series co-creator and star Laura Zak told the Daily Dot by phone on Thursday. “We thought, ‘Oh it would be nice to get nods from major queer publications.’ We hadn’t even dreamed of this—the highest level that you can reach in this industry.”

On Twitter, the show posted a video of Zak and actor Fawzia Mirza flipping out when they discovered the nomination on the Emmy website Thursday morning.

Just the night before, Richards had acknowledged that her scrappy, self-funded indie series was a total long shot for the nomination.

Stomach just curled into a knot at realization Emmy noms announced tomorrow. I know @HerStoryShow is a long shot, but I can't help but hope.

Zak said that she and Mirza had just kind of casually checked out the Emmy website—Mirza is crashing on Zak’s couch during Outfest—and didn’t expect to see Her Story listed.

“We haven’t even had a second to process it,” said Zak. “I did like three interviews before I even brushed my teeth this morning.”

Her Story also marks the first time a show directed by an out transgender woman—Sydney Freeland—has been nominated for an Emmy. But it’s not the only show with a trans director nominated for the 2016 round: Director Silas Howard proudly shared on Twitter that Amazon’s streaming series Transparent received a whopping 10 nominations.

Howard made headlines when it was announced that he would direct five episodes of the groundbreaking series during its second season. Transparent won five Emmys for its first: for directing, costumes, guest actor, theme music, and a best comedy actor title for star Jeffrey Tambor.

But Transparent has the backing of Amazon, whereas a win for Her Story would be nearly unprecedented: a show with no network, no studio, and a crew that depends on the couches of friends for accommodations.

That could change soon, as producer Amirose Eisenbach recently joined Her Story to work on pitching it to networks. But for now, it remains just about the most indie show ever nominated for an Emmy.

“We are representing everyone else today,” said Richards. “For everyone that isn’t used to being seen, it really feels like an affirmation in this moment.”