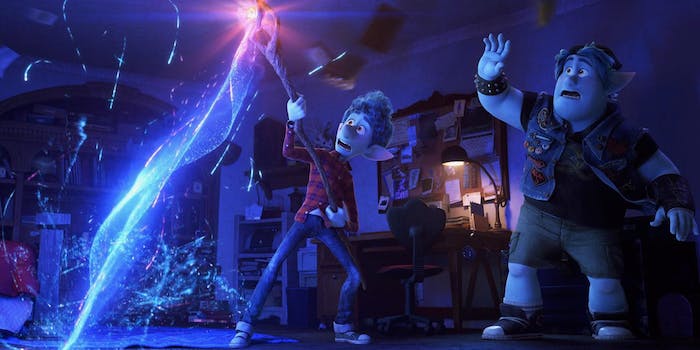 Disney releases ‘Onward’ early, will arrive on Disney+ in 2 weeks

This comes shortly after the film's theatrical release.

Disney is releasing Pixar’s Onward digitally tonight less than a month after the film arrived in theaters, the company announced Friday.

Onward will be available to purchase for $19.99 starting at 8pm ET/5pm PT on digital platforms while it will become available to stream on Disney+ two weeks later on April 3.

Onward is one of several major releases whose theatrical releases were cut short after most of the U.S.’s theaters shut down in the wake of COVID-19; as of March 18, Onward made just over $103 million worldwide. The move, much like Frozen 2’s decision to bump up its Disney+ release by three months, was made in part to give families something to watch while they’re staying at home in self-quarantine or while practicing social distancing.

“While we’re looking forward to audiences enjoying our films on the big screen again soon, given the current circumstances, we are pleased to release this fun, adventurous film to digital platforms early for audiences to enjoy from the comfort of their homes,” said Onward director Dan Scanlon and producer Kori Rae in a joint statement.

In the past week, we’ve seen several studios push up the digital release of their films that only just hit theaters like Birds of Prey, The Hunt, The Invisible Man, Emma, Bloodshot, and The Rise of Skywalker while Disney is using its own streaming service to offer Frozen 2 and Onward early.

Is this the new normal? It’s hard to say. The only films having their theatrical release windows shortened so far were already in theaters. While First Cow is getting rereleased by A24 later this year and Kino Lorber is teaming up with several smaller movie theaters to screen the Brazilian western Bacurau through a virtual exhibition program, the majority of upcoming releases—from No Time To Die and Fast & Furious 9 to Mulan and Black Widow (and many more)—have been delayed and pushed back entirely. But when it becomes safe to go back to screening movies in theaters, it may become harder to justify lengthy theatrical release windows when studios had the power to release things early all along.