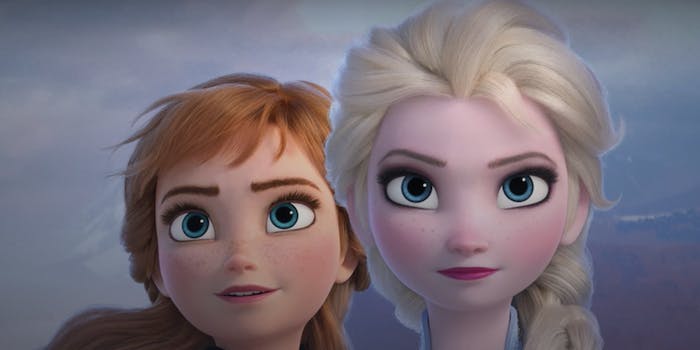 You better bet the children are ecstatic.

With “quarantine” becoming a regular part of the daily vocabulary for most Americans and uncertainty growing around the coronavirus, Disney has chosen to release Frozen 2 three months early. It initially announced Sunday, March 15, but got it up and running by Saturday evening.

The Verge reports that the decision, while not explicitly described as such, may have been heavily influenced by the rampant fear of coronavirus. Recently appointed Disney CEO Bob Chapek’s hinted at this in a press release.

“Frozen 2 has captivated audiences around the world through its powerful themes of perseverance and the importance of family, messages that are incredibly relevant during this time,” Chapek said.

As a record-breaking release in 2019, Frozen 2 raked in $1.4 billion internationally, the Verge reports. Its arrival to Disney+ has appeared as both a blessing and annoyance for parents who are quarantined with their children.

“Pre-releasing Frozen 2 on Disney+ this weekend for all the kids stuck at home,” Twitter user @DIYMoneyStuff wrote. “Brilliant.”

Some believe the release is also intended to bring in new subscribers to the service, which launched in November.

“The Walt Disney Co. will release Frozen 2 on Disney Plus several months early to give families a distraction—and give its streaming service a boost,” Twitter user @hoosjon wrote.

The announcement has produced a dilemma for some parents whose children are not currently on Spring Break and still have schoolwork to complete.

“With Frozen 2 coming out on Disney+ tomorrow and my kids having school only online this next week—what happens more, schoolwork or Frozen 2” Twitter user @DIYMoneyStuff wrote.

Others have also drawn the conclusion that the Frozen 2 release comes as a result of the coronavirus pandemic.

“Frozen 2 is coming out early on Disney+ tomorrow,” @Davidlylejones wrote in a tweet. “I have to imagine it’s because of the pandemic and all the kids that will be at home.”