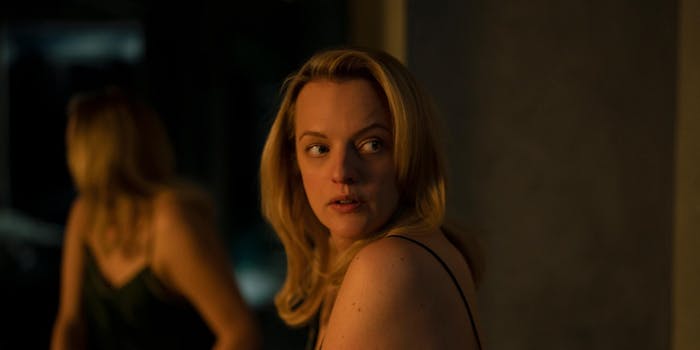 Review: ‘The Invisible Man’ reboot is thrilling but basic

The classic horror franchise returns as a surprisingly realistic thriller about domestic abuse.

Taking a sharp left turn after Universal’s vapid blockbuster reboots for Dracula and The Mummy, The Invisible Man returns as a low-budget psychological thriller about an abusive relationship. Written and directed by Leigh Whannell (a longtime horror screenwriter who recently directed the action movie Upgrade), it couldn’t be more different from the goofy 1933 original with Claude Rains. Elisabeth Moss stars as Cecilia, the ex-girlfriend of the titular invisible man Adrian Griffin (Oliver Jackson-Cohen), who uses his powers to make her life hell.

RELEASE DATE: Feb. 28, 2020
DIRECTOR: Leigh Whannell
RELEASE: Theatrical
Elisabeth Moss plays a woman escaping an abusive relationship, only to realize her tormenter has learned how to make himself invisible. An interesting twist on the classic ‘Invisible Man’ franchise, anchored by an intense performance from Moss.
Advertisement Hide

Moss is an ideal casting choice, a universally acclaimed actor who specializes in tense, mature dramas about sexism and toxic power structures. Her recent credits include The Handmaid’s Tale and Jane Campion’s grueling crime drama Top of the Lake, with The Invisible Man covering some similar territory. During the terrifying opening sequence, Cecilia flees for her life, sneaking out of her boyfriend’s minimalist fortress of a house. We don’t need any further information to know she’s been living through hell. Adrian Griffin is clearly rich enough to wield even more power than your average abusive partner, and the house itself is a panopticon: chilly open-plan rooms and floor-to-ceiling windows, surveilled from every angle by CCTV. But Cecilia does manage to escape, hiding out with her friend James (Aldis Hodge) until she receives some shocking news a few days later: Adrian is dead, and he’s left her a fortune.

It’s a simple but effective twist on the old Invisible Man story, turning it into a gaslighting drama. After a brief reprieve where she thinks she’ll get her life back together, Cecilia begins to feel like she’s being watched again. Objects move around the house she shares with James and his daughter (Storm Reid). Lights flicker on and off. She’s being haunted by something, and because Adrian was an expert in “optics” (complete with an ominous sci-fi lab in the basement) Cecilia develops a theory: Adrian found a way to make himself invisible, faking his own death so he could keep torturing her from beyond the grave.

Another movie might make things more ambiguous—is Adrian alive, or is she just imagining things?—but we all have certain expectations for an Invisible Man reboot, and the film confirms what’s happening pretty early on. Elisabeth Moss is predictably incredible, a master of trapped, flinching emotional torment. Her performance anchors a rather straightforward script that works its way down a checklist of domestic abuse tropes. Since there’s no way for Cecilia to prove what’s going on, her invisible harasser drives her toward a breakdown.

This reboot is getting a lot of buzz, but I suspect it benefits slightly from low expectations. It’s cool to see a vintage title like The Invisible Man become a hard-hitting psychodrama, and Whannell’s direction ramps up the tension with minimal need for visual effects. But did I actually enjoy watching it? Not really, although that’s a complicated question for this kind of movie, and your mileage may vary. I personally just found The Invisible Man stressful, unlike the recent gaslighting horror hit Midsommar, or Paul Verhoeven’s rape thriller Elle, both of which were perversely entertaining while inducing the same kind of stress. The Invisible Man is certainly effective horror, but it’s in this weird hinterland where it’s not sophisticated or insightful enough to measure up to something like The Babadook… while not actually being “fun” either, in the way The Purge combines social commentary with crowd-pleasing schlock. It sounds like Whannell was very conscientious about doing his research before tackling a female-led thriller about domestic abuse, and that shines through in Cecilia’s compellingly believable arc. I wouldn’t remotely say that Whannell mishandled the topic, or that men shouldn’t tackle this kind of material. (See my previous compliments to Paul Verhoeven and Ari Aster.) But I can’t help but wonder what this story would’ve looked like in the hands of a female filmmaker, or someone drawing from personal experience instead of research.

We generally discuss this kind of representation issue in terms of accuracy and sensitivity, hiring the right filmmaker to tell a difficult story without making tone-deaf mistakes. The Invisible Man doesn’t fall foul of those problems, but it’s also kind of basic. We don’t get to know Adrian on a personal level, so he’s essentially just a collection of textbook Abusive Boyfriend traits, amplified to supervillain proportions. There’s a definite lack of subversiveness or wit in Whannell’s very straightforward depiction of domestic abuse, and my guess is that the more films you’ve seen covering similar themes, the less interesting you’ll find The Invisible Man. On the other hand, if you aren’t familiar with abusive relationships (fictional or otherwise), then this film could be genuinely eye-opening, offering a realistic depiction of a woman trapped by forces she can’t control.