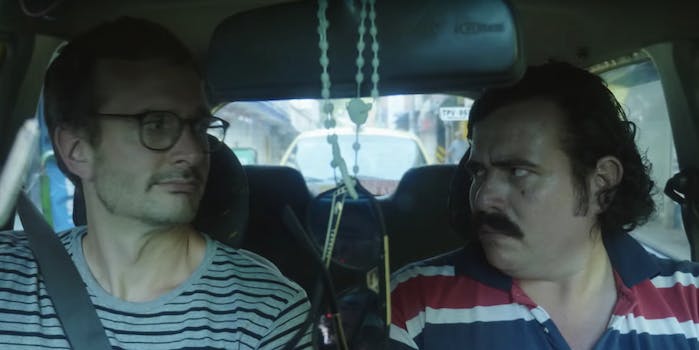 We should’ve seen this series coming. We’re bored out of our minds—a live-action pass through some of Dante’s circles as content wasn’t far behind. And consider that Farrier’s first flight at the ballsy and pathos-centric documentary (2016’s Tickled) was about “competitive endurance tickling.” The oddball Farrier plus macabre people, places, and things? What could go awry?

Not much as it turns out. The show wants to take a deep dive into dark tourism, which Wikipedia defines as “tourism involving travel to places historically associated with death and tragedy.” It seems straightforward as a concept; however, that dive ends up more a dip in the shallow end.

Farrier also includes general abnormality and novelty without considering consequences. He can be astonishingly exploitative traveling to an Indonesian corpse-exhuming ritual ceremony or be brashly irresponsible in explaining present-day Medellin, Colombia, with one-sided simplicity.

In one morality play, Farrier ends up deciding against shooting a cow, to the delight of his fellow travelers. The setting was an extreme shooting range in Phnom Phen where the same participants giddily fired high-caliber military grade weapons—in a country principally known for the Pol Pot-led Khmer Rouge, a Maoist regime that killed approximately 1.5 to 3 million Cambodians from 1975 to 1979. It’s a bad look.

Farrier assumes inherent likelihoods in its locales and this sometimes makes him a bad world traveler—Eurocentric and condescending—and not the best guide. In one segment in Africa, while making the mistake of using the phrase “slum tour,” he and a gang of white tourists traverse through a shanty town on shiny 12-speeds.

Farrier’s continued adventure in South Africa contains Dark Tourist‘s most potent content: His experiences with the Suidlanders, a set of white Christians of Afrikaner-Boer heritage. These right-wingers think that their inevitable demise draws near with each passing moment because a blitzkrieg of vengeful Black folks is coming to end them. Farrier gets it all on camera like only a witty, white man from New Zealand can. Here he delivers on his promise to capture the worst the world has to offer.

Need more ideas? Here are our Netflix guides for the best war movies, documentaries, anime, indie flicks, true crime, food shows, LGBT movies, gangster movies, Westerns, film noir, and movies based on true storiesstreaming right now. There are also sad movies guaranteed to make you cry, weird movies to melt your brain, old movies when you need something classic, and standup specials when you really need to laugh. Or check out Flixable, a search engine for Netflix.