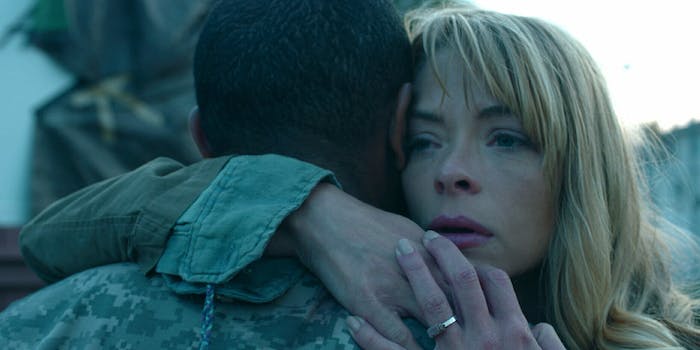 You can see this one coming a mile away.

Netflix’s toothless and boring Black Summer, a horror-drama set at the origin of a zombie outbreak from the canceled Z Nation universe, follows an assortment of desperate characters grappling with swift societal decline. With the rule of law, both legal and human, in the dumps, the group gets chased around this thing, and around that thing, and this other thing.

The eight-episode series, which adds absolutely nothing to the genre, is a wildly flat, poorly acted trainwreck that confuses jumpy, Children of Men camera work and smart-dumb zombies for high-quality storytelling.

More of a horror-comedy, Z Nation ended after five seasons on SyFy. Black Summer represents the former series’ more drama-filled dawn but isn’t connected in any other way. There’s no reasoning or history on how or why the world was befallen by the zombie apocalypse, with episodes uselessly partitioned in titled acts to foretell whatever will come forth. All takes place in the usual dreary, steely color palette, indicating an ominous future.

The survivors’ principal goal is to run as fast as they can toward a stadium where the military is supposedly doing well against the zombies. Jaime King stars as Rose, who is given the cliche hero’s journey of finding her daughter, who was taken away during an escape toward a military convoy. Throughout the first episode, sweat-drenched, confused characters pop up, generally in fits of terror, with their own underdeveloped stories. Spears (Justin Chu Cary) is the requisite mystery man with the gun. Everyone works through the language confusion with Korean-born Kyungson (Christine Lee). William Velez (Sal Velez Jr.) is always just angry enough to do squat unless a zombie is in his grill.

Some characters are given unusual amounts of space, like Lance (Kelsey Flower), who for most of an entire episode runs from a solitary zombie. Yes, one zombie, which is smart enough to race around a bus, or sus out hiding spots, but literally gets stuck in a book store door. This is an ongoing issue with the zombies that appear to be excellent in pursuit, but get caught up in the weirdest positions. The stiff acting in Black Summer is also a broad issue throughout the series, accentuated by the bad scripting and ineffective plotting.

For example, Rose emerges as a leader in episode 6 even though she’s been one of the most helpless characters in the show until then. After everyone else has done the yeoman’s work of killing zombies, she’s suddenly emboldened, with the clan looking toward her. She slows-walks out of a diner, once used as a hiding spot, where everyone else joins in and follows her out.

The worst part is that there’s a veritable wealth of knowledge on exactly how to make a simply passable zombie show. The Walking Dead franchise built an interesting playground and found interesting people to be our guides. The monsters are guided by rules that don’t bend for the sake of convenience. There are bad people who often turn out to be just as monstrous as the zombies. None of that occurs here. Netflix seemingly wanted cheap thrills—and it got them.