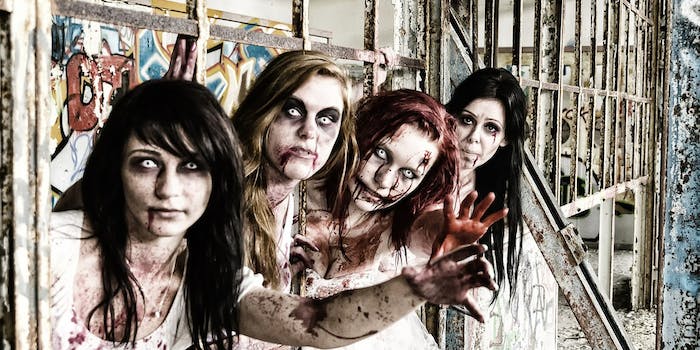 Scientists tell us how to survive an actual zombie apocalypse

Academia is just an excuse to do studies like this.

Everything you know about survival in the zombie apocalypse is a lie. The safest place isn’t a mall, but rather sparsely populated rural areas. (Romero 0, Walking Dead 1.)

The paper, called The Statistical Mechanics of Zombies, concludes after outlining numerous behavior and outbreak patterns that “we are largely doomed.”

The researchers will present their findings this week at an Austin, Texas, gathering of physical scientists. In a press release issued last month, the study’s lead author, grad student Alex Alemi, said that the real purpose of the study was to explore various modeling techniques.

“Modeling zombies takes you through a lot of the techniques used to model real diseases, albeit in a fun context.” The study also gave them plenty of room to experiment with randomized zombie behavior.

“At their heart, the simulations are akin to modeling chemical reactions taking place between different elements and, in this case, we have four states a person can be in–human, infected, zombie, or dead zombie–with approximately 300 million people.”

The study found that contrary to the general belief that the zombie outbreak would hit everywhere at once, the most likely scenario is that it would spread in pockets like any other virus or epidemic.

And if you’re faced with the undead, the best thing to do is head for the mountains or other extremely rural areas—or be living there already. Popular Science also points out that though the study only looked at the U.S., Canada would probably also be a smart survival location. After all, nobody lives there.

In the model, a densely populated place like New York City would fall in a day. Other places like upstate New York would potentially have several weeks to prepare.

The best news is that an outbreak of flesh-eating undead is highly unlikely. But second-best is the knowledge that if official predictions, survival guides, and scientific research count for anything, the human race is prepared for the zombie apocalypse as we’re ever going to get.