You better do your homework.

Services like Sling TV and Hulu with Live TV may get the most credit for bringing streaming live TV to the masses, but AT&T’s U-Verse has been doing it for years. With their U-verse app and website, AT&T TV subscribers can watch their favorite shows on the go or at home, giving the benefits of cord-cutting without actually cutting the cord. Here’s everything you need to know about AT&T U-verse.

What is AT&T U-verse?

Launched in 2006, U-verse was initially AT&T’s brand name for its bundled TV and internet services. In 2016, the company announced that U-verse would only apply to its television services. U-verse service plans are competitively priced for the market and affordable—at least as far as bulky cable packages go. Where it rises above streaming TV services is the sheer number of channels you get—238 of which can be watched online via the U-verse app.

With basic packages starting at $50 for over 200 channels and topping out at $125 for more than 550 channels, it’s easy to get a ton of programming without breaking the bank. The question is: Do you need that many channels?

U-verse packages come in three flavors: U-family, U200, and U450. Thankfully, there are no hidden costs, so what you see is what you get. The advertised price includes things like your monthly equipment fee for up to four rooms and your HD DVR fee. Given the way some other companies try to bait and switch when it comes to pricing the upfront costs, that’s . Each package comes with local channels, access to U-verse’s on-demand library, and the ability to watch your favorite shows online via the U-verse app. 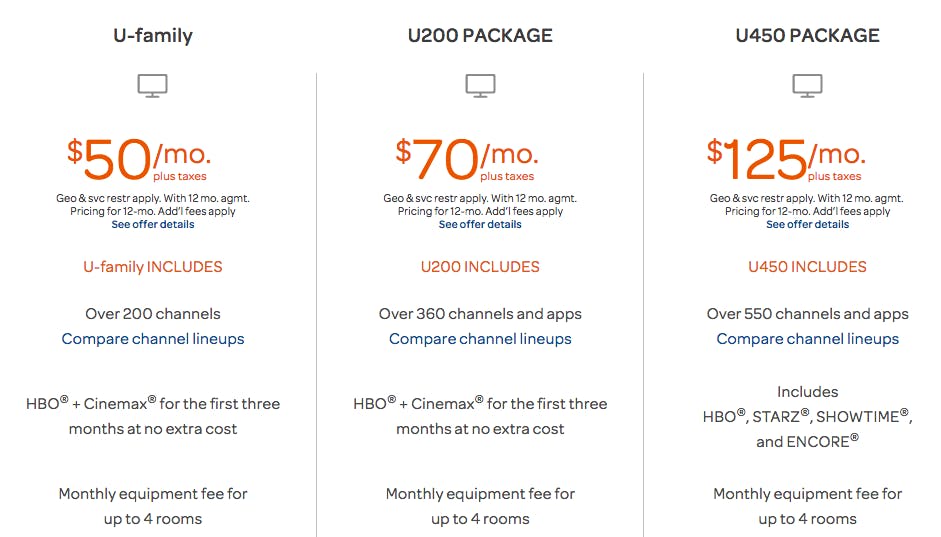 The U-family plan is a budget-friendly plan that costs $50 per-month U-family plan with 200 channels focused around the family, meaning you’ll get all the Nickelodeon and Disney action you could ever hope for.

The U200 is a healthy middle tier that gives you 360 channels, including 46 digital music channels and more sports programming, for $70 per month.

The U450 package goes one step further, offering you a total of 550 channels, which includes premium cable channels like HBO, Starz, Showtime, and Encore. It’s $125 per month

Of course, if you’re already an AT&T customer, you may save some money by bundling.services. You can essentially get 50Mbps internet for an additional $30 per month and both plus a digital home phone for a total of $100, but in both cases, you’re looking at potential two-year commitment. 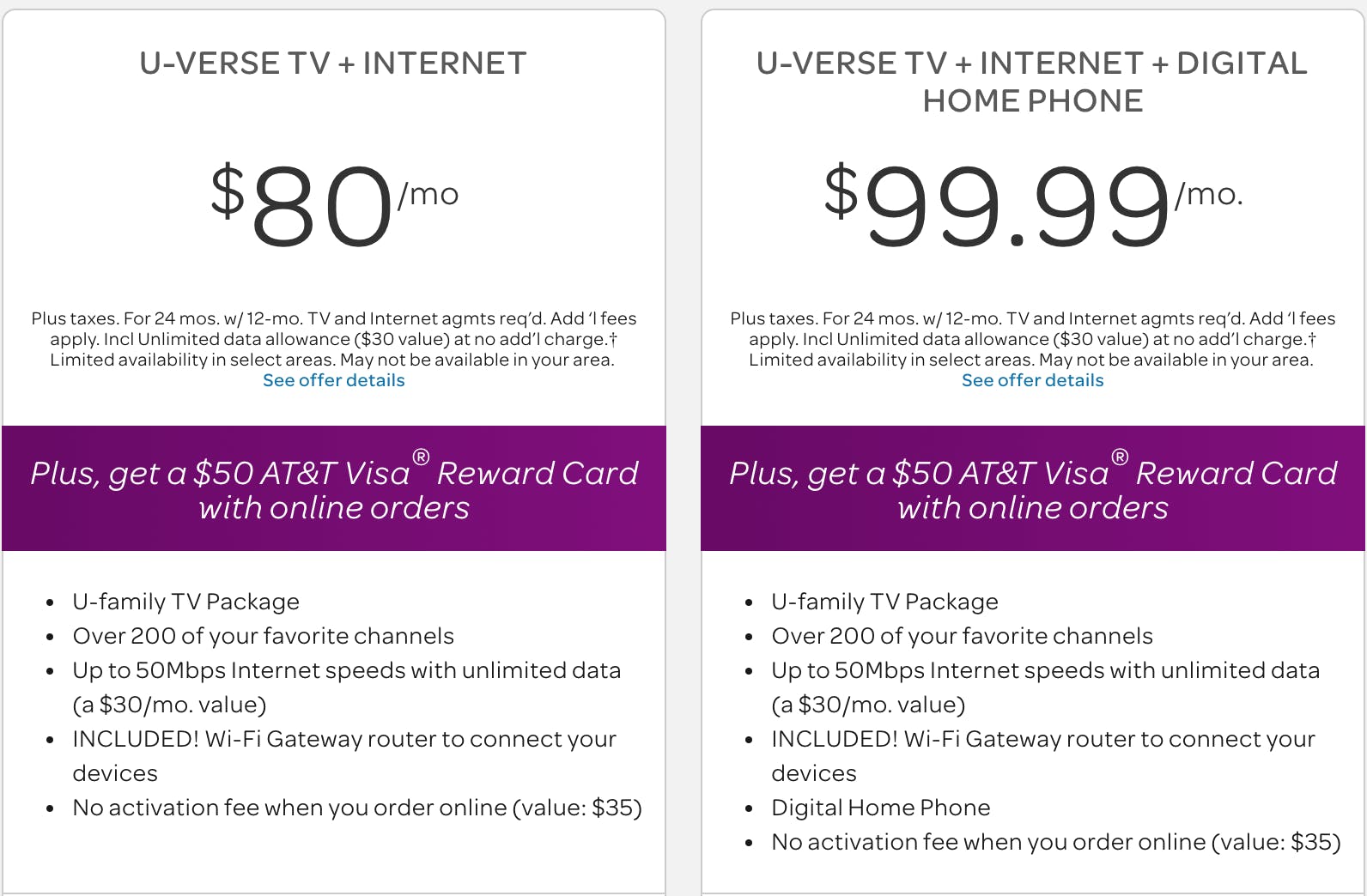 U-verse’s most significant selling point is its app, which allows users to watch live and on-demand content from anywhere they can connect to the internet. With featured content, the ability to view recordings from your DVR, and an incredible built-in remote control, the U-verse app sets a standard for how cable companies can add value to the customer experience. 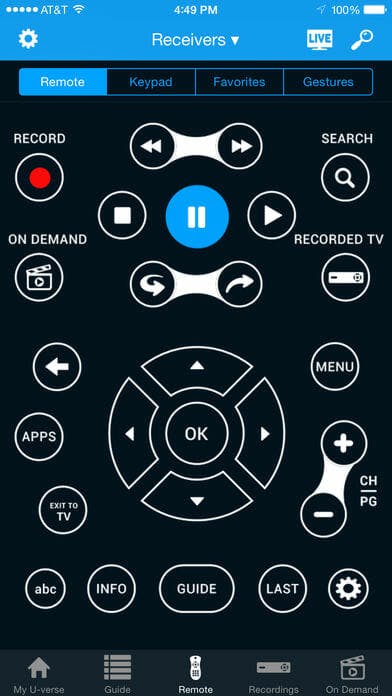 That said, U-verse appears to towards the end of its life. You can currently stream your programs on the U-verse app or via your computer browser, but at the end of October, AT&T is ending browser streaming, forcing users to use the app and nothing else.

This would be annoying if it were the only loss of service, but in May of 2017, the company nuked its Xbox One and Windows Mobile streaming options too. That same month it was reported by Yahoo that the service would be shut down by the end of the year, though AT&T ultimately changed its mind. In September, AT&T CEO Randall Stephenson told the audience of an investor conference that the company will be launching a new cable TV-like service in 2018.

If you’re looking for an alternative, AT&T has one already within the family: DirecTV Now. With packages starting at $35 per month for 60-plus channels and topping out at $70 for 120-plus channels, DirecTV Now gives you better mobile viewing options while providing a more extensive range of apps and options for home viewing. DirecTV can be watched with the web the web browsers Chrome and Safari and on almost every major streaming device: Roku, Apple TV, Google Chromecast, Amazon Fire Stick and Amazon Fire TV, and iOS and Android products.

Sure, you won’t get hundreds of channels, but their lineups include all of the major channels you love. And here’s the best part: If you’re already an AT&T Unlimited subscriber, you’ll save $25 a month on either one of those packages. That means you could get a basic cable package for $10 a month, and cut the cord in the process. That’s hard to beat.

Is AT&T U-verse worth it?

If you absolutely have to have hundreds of channels, U-verse is a great way to do it without having to deal with Comcast. Plus every subscription comes with three free months of HBO and Cinemax. But it’s more expensive than the streaming TV options that have popped up, including YouTube TV, PS Vue, and Hulu with Live TV.

More importantly, given the loss of three different streaming options this year alone, and the news that AT&T will be starting a new service next year, signing up for U-verse at the moment feels like a fool’s errand. It’s likely that U-verse customers will get rolled into whatever this new cable-like product is, but until we have a better idea of how that will impact pricing, options, and access, it’s hard to recommend a service that may not have much of a future.