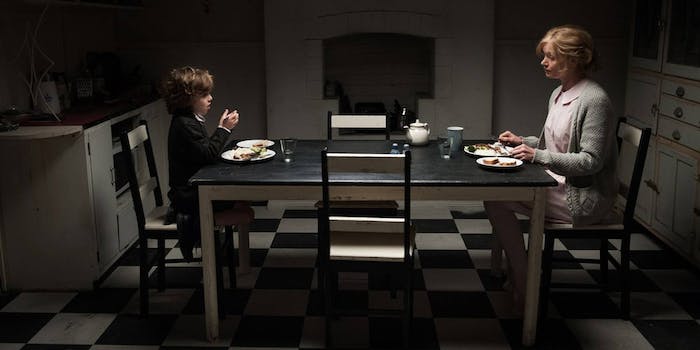 From gore to ghosts, here are the scariest movies of all time.

When you think of the scariest movies of all time, what comes to mind? The Exorcist, Texas Chainsaw Massacre, The Shining, Halloween? These films are all terrifying classics watched by millions. They’ve earned a place of respect in the pantheon of horror. But you’ll notice they aren’t on this list.

This is a list of the scariest movies ever, after all. Just because something is scary and popular doesn’t mean much. Besides, it’s 2017: A good chunk of the films here are from recent years. As society changes, tastes and fears change along with it. But these skin-crawling flicks are guaranteed to keep you up at night.

The scariest movies of all time

The debut film from Australia’s Jennifer Kent, The Babadook is just as powerful a drama as it is a horror film, and it’s a hell of a horror film. Following the death of her husband, Amelia must deal with crippling grief and suddenly being a single parent. It’s a miserable enough scenario, but when her son brings home a horrifying children’s book things take a dark turn as she wonders if something evil is out to get her child—or if she’s losing her mind. Digging deep into mental illness, loss, the struggles of motherhood, and parenting, you wouldn’t think there’d be time for chilling terror. You’d be wrong. In a world where horror is taken seriously, Essie Davis would have been nominated for an Oscar for her portrayal of Amelia. Instead, she’ll just be scaring people for years to come.

Is it streaming? The Babadook is available on Netflix and via Showtime Anytime. You can also rent it digitally from Vudu, iTunes, or Amazon.

Most people are instinctively scared of the dark. As an adult watching The Descent you’ll learn to fear it again. The plot follows a group of six women on a spelunking adventure who end up lost in an uncharted cave system. Without the aid of monsters or extreme gore, the film’s opening is a harrowing tale of survival; made all the more powerful by the time it spends developing the relationships between the characters. By the time monsters and gore show up in the second act, you’ll be too emotionally invested to turn away. Sadly the U.S. version features a silly shock ending, so if you have the opportunity make sure to watch the director’s cut.

Is it streaming? The Descent is available for streaming via Shudder. You can rent it digitally on Vudu, iTunes, or Amazon.

In the digital era, The Ring could have easily lost its power. But thanks to brilliant pacing and a slow reveal of its main villain, this ghost story has held up long past when most households had a VCR. The premise is simple: There’s a tape that kills everyone who watches it within seven days. Equal parts murder mystery and ghost story, this slow-burning horror classic throws twists at you until its final minutes. As creepypasta begins to cultivate the campfire stories of a new generation, it’s nice to look back at The Ring as a precursor to the horrific urban legends to come.

Is it streaming? The Ring can be rented digitally from Vudu, iTunes, and Amazon.

Of all the films on this list, Martyrs is the hardest to recommend. This French classic of extreme horror features some of the most brutal violence you’ll ever witness on-screen, with an ending as nihilistic as the hour and a half the proceeds it. A young woman attacks a family one morning during breakfast, dead set on proving they kidnapped and tortured her as a child. What begins as a story about revenge slowly unfolds into an unspeakable darkness that can’t be described without intense spoilers. With stunning direction by Pascal Laugier, there isn’t a more visceral film on this list. It’s more than just gore, and if you’re willing to look past the streams of red there is a deeply soulful tale of suffering to be found here. Just be careful not to accidentally watch the awful American remake.

Is it streaming? No, but it is available to rent digitally on iTunes, Google Play, and YouTube.

The ’90s were an odd decade for horror. While classics like Scream have held a place in our hearts for their delicious revivalism, for much of the decade horror lived in an odd ghetto. The genre was unloved and underfunded by studios, leaving a plenty of unrealized good ideas on the table. Candyman is an exception to that idea—a smart, brutal tale of terror that tickles all your horror needs whether you’re a gore fan or simply need a ghost to spook you. Following a grad student, as she tries to uncover the true story behind an urban legend, Candyman lays down the same connective tissue to today’s creepypasta myths as The Ring does. The difference is the way Candyman draws attention to urban blight along the path to its blood-spattered conclusion. Add in a brilliant score by avant-garde composer Philip Glass, and you have one of the underrated artistic gorefests in horror history.

Is it streaming? No, but it is available digitally on Vudu, iTunes, and Amazon.

Calling Silence of the Lambs a horror film may be tough, but how many suspense films feature crucifixion, cannibalism, and skin suits. The misconception that this isn’t a horror film is part of what helps make it so terrifying—viewers come in with basic expectations and end up surrounded by unspeakable evils. While much has been written about Anthony Hopkins’ Hannibal Lecter, the real joy of the film is Ted Levine’s Buffalo Bill. Whether driving home the importance of lotion or dancing to new wave, each of his scene helps build a sense of dread that will stick with you long after you’ve run out of Chianti.

Is it streaming? You can stream Silence of the Lambs on HBO. It is also available for rental digitally on Vudu, iTunes, and Google Play.

Is it streaming? Frontier(s) is now streaming on horror site Shudder, and it’s available to rent on Vudu, Amazon, and Google Play.

When the fiancèe of special agent Soo-Hyun falls victim to a brutal serial killer, the distraught officer begins stalking the killer himself. What begins as a simple game of cat and mouse quickly dissolves into an increasingly violent feud as the two seek revenge against each other. Turning the police procedural genre on its head, this beautifully shot nightmare follows a good man’s descent into evil as he tries to match a monster he can’t understand. Sadistic, gorgeous, and haunting, I Saw the Devil is one of the scariest films to ever come out of Korea.

Is it streaming? I Saw the Devil is streaming on Hulu and Shudder and for rent digitally on Vudu, iTunes, and Amazon.

Finally, a film the whole family can watch. Tobe Hooper’s classic haunted house tale was co-written by Steven Spielberg and features the scariest clown in cinema history. There are plenty of films about families that move into homes only to discover something evil already lives there. Where Poltergeist shines is its execution. At first the ghosts almost seem playful—stacking chairs and sliding children across floors. It’s all good fun, at least until the tree tries to eat your son and a portal sucks your daughter into another dimension. Utilizing brilliant practical special effects, Poltergeist delivers a funhouse of horrific PG set pieces from the era where PG meant someone’s face could melt off. Horror films rarely feature a family this believable or tightly knit. Their problems are easy to relate to, so when hell breaks loose you’re invested far beyond the standard group of hot teens. All-ages horror exists, but none of it comes close to Poltergeist.

Is it streaming? No, but you can rent it digitally from Vudu, iTunes, and Amazon.

Our final entry is another all-ages classic and the only black-and-white film on the list. Director William Castle was known more for gimmicks, like putting flying skeletons in the theaters showing his movies, than he was for scary pictures. House on Haunted Hill is the exception to the rule—and a darkly comedic exception at that. Here a group of strangers agrees to be locked in a house overnight for a $10,000 apiece with an eccentric millionaire and his wife. Opening with Vincent Price’s terrifying voiceover, this tale of murder, backstabbing, and sudden pop-up witches may seem quaint by modern standards. At least until you find yourself screaming in surprise by a sneaky stranger or an unexpected moment of gore. A perfect blend of humor and horror, House on Haunted Hill is a reminder that films don’t need to wallow in guts and despair to scare you to your core.

Is it streaming? You can stream House on Haunted Hill on Amazon Prime and YouTube or rent it digitally from Vudu and iTunes.

Is it streaming? No, but you can rent The Exorcist from Amazon and Google Play.

Is it streaming? You can stream Se7en for free on Netflix or rent Se7en from Amazon and Google Play.

Is it streaming? Yes, The Conjuring is streaming  on Netflix and is available for rent on Amazon or Google Play.

Is it streaming? No, but you can rent The Birds from Amazon and Google Play.

Is it streaming? Yes, Henry is streaming on Shudder and available for rent on iTunes and Vudu.

Is it streaming? Yes, Alien is streaming on HBO, and it’s available for rent on iTunes and Vudu.

Is it streaming? Green Room is streaming on Amazon, and it’s available for rent on iTunes and Vudu.

Is it streaming? The Loved Ones is available to rent from iTunes or Vudu.

Is it streaming? REC is streaming on Shudder, and it’s available for rent on iTunes and Amazon.

Is it streaming? The Witches is available to rent on Amazon.

Is it streaming? Hell House LLC is available via Amazon Prime.

Is it streaming? No, but Wait Until Dark is available to rent on Amazon, Google Play, or Vudu.

Is it streaming? Black Christmas is streaming on Showtime and Shudder and available for rent on Amazon, Google Play, or Vudu.

Is it streaming? Hush is a Netflix exclusive.

Editor’s note: This article is regularly updated for relevance.
Share this article