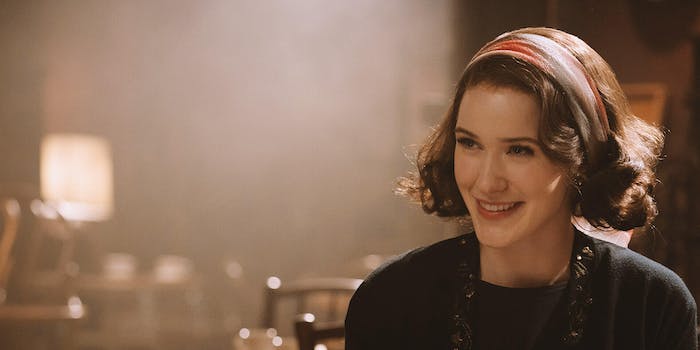 Did Amazon give ‘Marvelous Mrs. Maisel’ an unfair Emmy advantage?

Amazon‘s The Marvelous Mrs. Maisel won two Emmys this year: Tony Shalhoub for supporting actor in a comedy series and Alex Borstein for supporting actress. This comes after the most eyebrow-raising campaign of Emmy season.

TV networks always pour money into Emmy campaigns, with “for your consideration” ads and TV interviews arriving in the lead up to the awards. However, a lot of these campaigns are more local, targeted specifically at the heart of the TV industry in Los Angeles. Last year saw Netflix build its own exhibit hall, while Amazon took over the Hollywood Athletic Club to house “experiences” inspired by its hit shows.

So while the public does get a glimpse of Emmy season, much of it consists of semi-private events for potential Emmy voters. This year’s Marvelous Mrs. Maisel campaign was notable because it arguably amounted to bribery.

Back in August, Amazon arranged a series of publicity stunts where businesses would offer products at “1959” prices, fitting in with Marvelous Mrs. Maisel‘s historical setting. This included cheap deli food, 51-cent movie tickets, and $40 stays at the Hollywood Roosevelt hotel. But by far the flashiest moment was a Los Angeles gas station offering gas at 30 cents per gallon. The location soon became so swamped with people clamoring for cheap gas that the police had to shut it down.

Santa Monica Police suspend an Amazon Prime promotion offering gas for 30 cents a gallon. Traffic issues are the big concern. Details coming up at 11am on ABC7. #maiselday pic.twitter.com/sJHQLcDUaK

“Maisel Day” may not have caught all of the TV Academy’s 25,000 Emmy voters, but it still made a splash. Its whole purpose was to associate Marvelous Mrs. Maisel with fun giveaways and discounts.

Does this put a slight pall over the show’s two Emmy wins, or was Amazon just playing the game? It’s certainly an interesting precedent, anyway.

With the streaming wars ramping up and several new platforms launching in the near future, next year’s Emmy Awards will be more competitive than ever. Apple TV+ and Disney+ will have to work hard to make sure their shows get the right attention.