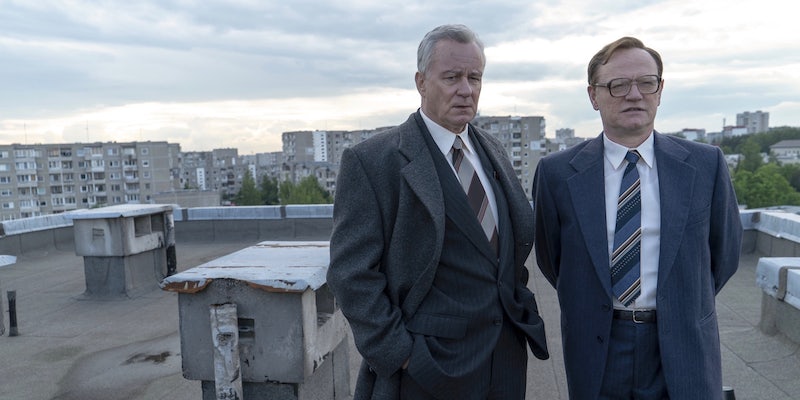 ‘Chernobyl’ dives into the cover-up behind a wide-scale disaster

Chernobyl is a meticulous retelling of what occurred behind one of the worst man-made disasters in modern history, leaving no stone or piece of radioactive graphite unturned. With a stellar cast and a script that cranks up the tension, Chernobyl relays an astounding and, at times, incredibly relevant tale.

RELEASE DATE: 5/6/2019
CREATOR: Craig Mazin
STREAMING: HBO Go/HBO Now
Depicting both the disastrous 1986 nuclear accident at Chernobyl and its aftermath, ‘Chernobyl’ looks at the efforts made by a small group of people to figure out what happened.

Many of us already know the basics of the Chernobyl disaster: An explosion at the Ukraine power plant on April 26, 1986, led to radioactive material spreading across parts of the Soviet Union and westward. Parts of the Chernobyl site are still so radioactive today that people aren’t allowed to visit them, and the nearby town of Pripyat is still abandoned. Some in Ukraine have even drunk milk with high levels of radiation in it because Chernobyl affected the cows in the area. In the two episodes that debuted at the Tribeca Film Festival last week, Chernobyl captures the scope of the disaster in small and devastating ways.

Watching Chernobyl can sometimes feel like you’re sitting through a horror film. The explosion itself comes in waves, often accompanied by a timestamp informing you how long it’s been since the plant exploded. To stop it, dozens of men head to their almost-certain doom; if the fire and elements within Chernobyl don’t kill them right away, the radiation exposure almost certainly will later. Some men vomit from it; others emerge from the rubble with burns and bleeding wounds. For others, the damage comes later. Ash almost looks like snow as it falls softly in Pripyat, and townspeople look in awe at what they think is just a fire; some of them brought their babies out for it. The horrors that await them are only just beginning, and at times, it’s difficult to watch.

Even well-intentioned actions like holding a door open for a colleague or moving radiation-laced clothing into another room are rewarded with radiation-damaged skin. Whether you have a relative idea of how this story goes, the sense of dread that comes with it never fully goes away. But you can’t look away, either.

The external threats are only half of it; there is also horror in the (often) lack of humanity in the face of the unthinkable. It quickly becomes apparent that the government commission appointed to investigate Chernobyl wants to keep things under wraps and be done with it as quickly as possible. The government would rather pretend that everything is fine or chalk it up to a minor accident than accept that millions of lives are in danger. Creator Craig Mazin’s scripts make several allusions to our current political climate that are apparent without the jokes.

Soviet Deputy Prime Minister Boris Shcherbina (Stellan Skarsgård) initially reports to the committee that the radiation coming from Chernobyl is “the equivalent of a chest X-ray.” Valery Legasov (Jared Harris), a nuclear physicist on the committee, sees the evidence that Chernobyl is much worse than anyone thought, while Ulana Khomyuk (Emily Watson) provides even more insight and context. (While Skarsgård and Harris play real people, Watson’s character is a composite of several women who would’ve been in Ulana Khomyuk’s position.) Convincing those in power just how dangerous it all is (and then keeping it quiet from the rest of the world) is another story.

Both the writing and the acting in Chernobyl are compelling enough to make what some might consider dry subject matter come to life on the screen, injecting a sense of urgency even when we know (or think we know) where it’s going. In episode 2, three men are called to volunteer for a mission that will almost surely kill them—they’ll be dead within a week, one person notes—and are offered 400 rubles as compensation; nobody volunteers. They’re told about the stakes of the mission; millions could die if nobody steps up for this mission. Three men volunteer anyway, because it could make all the difference.

“The danger is that if we hear enough lies, we won’t be able to recognize the truth at all,” Legasov says. The lie, of course, is enticing; many of them are. The truth is far uglier, but for those who sought it out in the aftermath of Chernobyl, it made all the difference. As much as Chernobyl might make you squirm, it’s a truth worth watching.

Correction: A previous version of this review misidentified the three volunteers in episode 2.