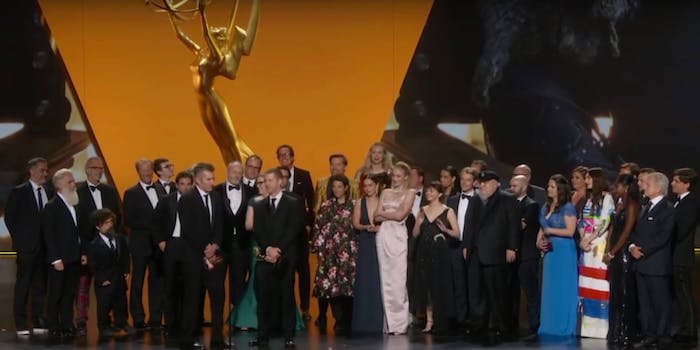 The series took home 12 Emmys, the most of any show this year.

Game of Thrones won two awards at the 71st Primetime Emmys Sunday night with its total award haul matching its record for most wins in a single year.

Last week, Game of Thrones already picked up 10 awards at the Creative Arts Emmys in technical categories like visual effects, costume design, and sound design but its only acting nomination (Carice van Houten for guest actress in a drama series) lost to The Handmaid’s Tale. Going into Sunday night, HBO’s juggernaut series was the overwhelming favorite to win for outstanding drama series, along with several other awards.

Despite how the final season of Game of Thrones was received by critics and viewers alike, it’s clearly beloved by the Academy. Not just for the show’s impressive Emmy haul over the years—the series won a total of 59 Emmys over eight seasons, the vast majority of them being handed out during the second half of the series’ run—but because of how much Game of Thrones has changed television. In a segment that basically served as the start of what would be Game of Thrones’ victory lap, Tyrion’s divisive speech about the power of stories played over a montage of Game of Thrones. It led to a somewhat awkward setup as 10 members of the Game of Thrones cast presented the Emmy for supporting actress in a limited series or TV movie.

It didn’t include everyone; at one point, the camera cut away to several of the show’s actors in the audience. But there was a reason for that: the cast on-stage were all nominated for Game of Thrones’ final season (many of them competing directly against each other), and within the next hour or so, the vast majority of them would lose.

Peter Dinklage picked up the sole acting award for outstanding supporting actor in a drama series, beating co-stars Nikolaj Coster-Waldau and Alfie Allen. It was his fourth time winning the award, which broke Aaron Paul’s Breaking Bad record for the number of wins in this category, and in his acceptance speech, he praised showrunners David Benioff and D.B. Weiss.

“I count myself so fortunate to be a member of a community that is nothing but all about tolerance and diversity because no other place could I be standing on a stage like this,” Dinklage said. “It’s been about 10 years, all said and done, since the moment I met Dave and Dan till right now. I had no idea what I was getting myself into, but I knew that David and Dan were quite brilliant… We did nothing but sweat, we did nothing but laugh. Dave and Dan, we literally walked through fire and ice for you—literally—and I would do it all again in a heartbeat.”

Dinklage would win the only acting Emmy for Game of Thrones of the night. The four actresses nominated in outstanding supporting actress in a drama (Maisie Williams, Sophie Turner, Lena Headey, and Gwendoline Christie) likely split the vote, allowing Ozark’s Julia Turner to win. Kit Harington and Emilia Clarke both lost in the lead acting categories to Pose’s Billy Porter and Killing Eve’s Jodie Comer, respectively.

The show didn’t fare well in writing or directing, either. The divisive Game of Thrones series finale lost for writing to Succession while three directing nominations also probably split the vote, paving the path for Jason Bateman to grab a directing Emmy for Ozark.

But nothing could stop Game of Thrones from nabbing the top award of the night. Whether Game of Thrones’ fourth outstanding drama series win is validation for everyone who worked on it and that the Academy loved the final season of Game of Thrones or simply an acknowledgment of how much the show has, for better or worse, changed television, is irrelevant. For one final moment, for now, the series was on top.

Benioff and Weiss took the stage for the acceptance speech, acknowledging the long road it took for them to get there with Weiss joking that “it is amazing that all of you are still alive.”

“These last 10 years have been the best years of our lives and for everyone who worked with us on it, I can’t believe we finished it,” Benioff said. “I can’t believe we did it. We did it all together and it’s over, and we shall never see your like again.”

In the end, the show could only tie its own record of winning 12 Emmys for a single season of television. But still, 12 Emmys is still 12 Emmys.

We break the wheel together.#GameofThrones has been awarded 12 #Emmys, the most of any program this year. pic.twitter.com/gTYq8JWCtD