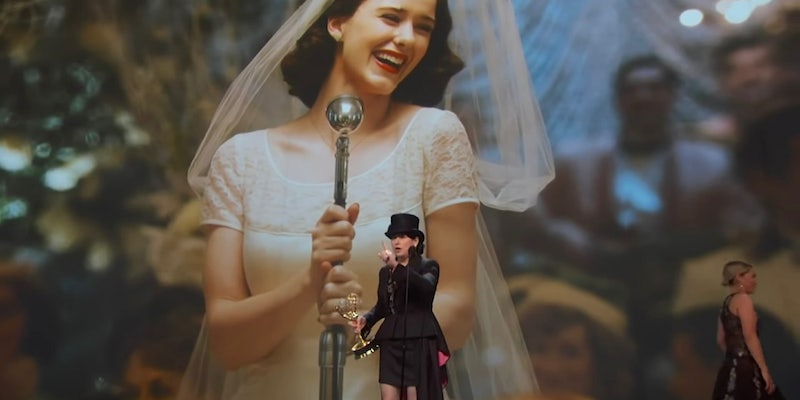 ‘The Marvelous Mrs. Maisel’ gave Amazon its best night at the Emmys

Leading up to Monday’s Primetime Emmys ceremony, the rivalry between Netflix and HBO had been front and center. For the first time, Netflix had emerged as the network with the most nominations over HBO, and the two were practically tied after last week’s Creative Arts Emmys.

But at the end of the day, it was Amazon Studios that ended up with one of the night’s top awards.

While streaming shows are now a staple at the Emmys, it wasn’t until last year that Hulu and The Handmaid’s Tale finally broke ground by nabbing streaming’s first best series win in the drama category. This year, Amazon Studios broke similar ground with The Marvelous Mrs. Maisel, a period comedy about a 1950s Jewish housewife who starts to perform standup comedy, by nabbing the first streaming win for outstanding comedy series.

The Marvelous Mrs. Maisel—which already came into the Emmys Monday night with three wins—picked up five of the six awards it was nominated for during the Primetime Emmys, the majority of them won by women. Rachel Brosnahan and Alex Borstein won for lead actress and supporting actress, respectively, Amy Sherman-Palladino (who some will also know as the creator of Gilmore Girls) won for writing and directing the show’s pilot, and Sherman-Palladino was among the winners for outstanding comedy series. (Tony Shalhoub, who was nominated for outstanding supporting actor in a comedy series, lost to Barry’s Henry Winkler.)

The wins for The Marvelous Mrs. Maisel—and for Amazon as a whole—stand out in contrast to some of the studio’s issues in recent years. It struggled to get a critical and commercial hit like Netflix and Hulu, and while Transparent creator Jill Soloway and star Jeffrey Tambor both nabbed Amazon Emmys and remained a promising contender, it was never able to win for outstanding comedy series. (The show’s final season has also been delayed after Amazon fired Tambor after two transgender actresses said that he sexually harassed them.) The win also comes after Amazon Studios fired previous head Roy Price—who previously refused to pick up The Handmaid’s Tale and Big Little Lies, which both won big at previous Emmys ceremonies and canceled Good Girls Revolt despite its critical acclaim and viewership—for sexually harassing a female producer.

Amazon has also not been shy about wanting its own Game of Thrones, which won nine Emmys Monday night including outstanding drama series and an outstanding supporting actor win for Peter Dinklage. But as it’s shown with The Marvelous Mrs. Maisel, you don’t necessarily need one to compete at the Emmys.

And perhaps it’s also not about how much programming you put out. Netflix has far more programming out and won several big awards Monday, but its biggest wins came for The Crown’s Claire Foy, Godless’ Jeff Daniels and Merritt Wever, and John Mulaney for writing his Netflix special Kid Gorgeous. (Hulu also struck out as The Handmaid’s Tale lost all of the awards it was nominated for during the Primetime Emmys, including five of its nominations for acting.)

Emmys co-host Colin Jost even made a joke about how much Netflix is releasing on its own.

“This year, Netflix will spend $8 billion on programming,” Emmys host Colin Jost noted in his monologue now how much TV there is out there. “They now have 700 original series, which makes me realize that the show I pitched them must’ve really sucked.”