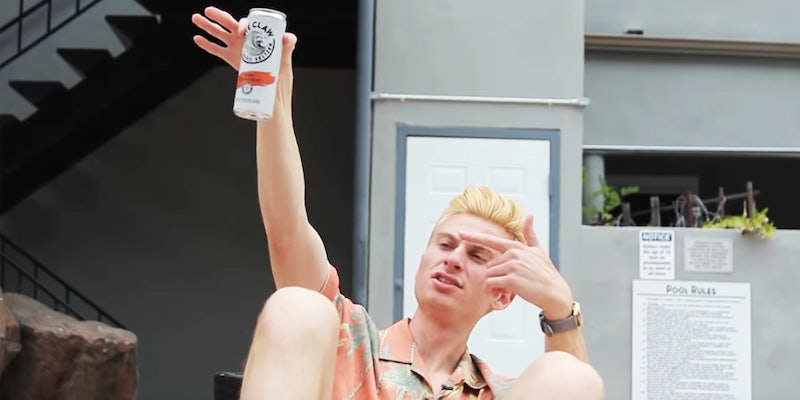 What is White Claw—and why is the beverage inspiring memes?

When White Claw hard seltzer broke into the scene in 2016, it joined Bon & Viv’s Spiked Seltzer as a “healthy” low-calorie alternative to boozing that capitalized off of the millennial obsession with non-alcoholic seltzers. (Or you know, “seltzer.”) Brewed with a cold, natural fermentation process in a similar way to traditional beer, hard seltzers are typically fermented with sugar instead of malted barley.

Yet, the result yields an alcoholic beverage low in sugar and carbs with a manageable ABV (averaging around five percent) that makes it the ideal, versatile beverage for anything from a day at the beach to a night out on the town.

It didn’t take long before the market became saturated with competing hard seltzers from brands such as Henry’s, Smirnoff, and even offerings from small craft breweries. Eventually, even big brands such as Bud Light, Coors, and Corona got into the hard seltzer game. But beyond the phenomenon that was referred to as the “summer of hard seltzer,” White Claw Hard Seltzer unarguably reigns supreme.

As RuinMyWeek pointed out, White Claw has developed a cultural presence similar to other brands of beverages such as Four Loko and LaCroix. The Takeout noted that people are using the phrase “White Claw lifestyle” mostly sans irony—and that the brand has transcended its competition by becoming  synonymous with hard seltzer, “like Band-Aid stands in for adhesive bandages.”

White Claw (which is owned by Mark Anthony Brands, the same company that makes Mike’s Hard Lemonade) is also generally regarded as one of the better-tasting of the hard seltzers. When the brand first launched, it came in five flavors: black cherry, ruby grapefruit, natural lime, and raspberry, which was sold in a variety pack; as well as mango, which was typically sold separately. (A “pure” flavor, likened to a vodka soda, was also available for a limited time in 2019.) In 2020, White Claw released a second variety pack which featured the mango flavor, and three brand new flavors: watermelon, lemon, and tangerine.

It’s not a simple task to pinpoint exactly how and when White Claw became a cultural phenomenon. At least some of the credit goes to comedian Trevor Wallace (of the “Kyle” Monster Energy-chugging viral fame), who released the following YouTube parody on June 25. In the clip, Wallace portrays a fratty, unemployed douche-bag character who just can’t extol the praises of White Claw enough.

The video, which has since been viewed over 5.5 million times as of February 2021, is no doubt what we have to thank for the popularity of the term “White Claw summer” and catchphrase “Ain’t no laws when you’re drinking Claws.” (As a result, there is certainly no shortage of fan-created apparel on Esty emblazoned with the ubiquitous phrase.)

But also, as evidenced by the video, the thing that really differentiates the brand from similar beer alternatives is that fruity, low-calorie alcoholic beverages have historically been written off as “girl drinks.” White Claw, on the other hand, has become ingrained in so-called “bro culture” and is therefore socially appropriate for just about anyone to consume.

“I’m a bro, I do dude things and get stoked and all that,” a producer named Ben Shea told Business Insider in a recent interview. “But I also just feel comfortable saying I like White Claw and that it’s good.”

It also certainly didn’t hurt that White Claw was apparently spotted just about everywhere during 2019’s Coachella, leading The Wrap to proclaim it the unofficial “rising star” of the music festival. The piece referred to the alcoholic seltzer as “Gen-Z’s version of Zima,” which doesn’t sound at all inaccurate.

Likewise, a popular way of designating a bar that’s run out of White Claw is apparently to say it’s been “declawed.”

Given the sweeping, widespread popularity, it’s hardly surprising that White Claw memes quickly dominated the internet. Although some of the jokes would come at the expense of the boozy seltzer, or those who enjoy it—most of the memes simply celebrated the cool, refreshing taste.

“i think it’s time you had a white claw summer” jokes pic.twitter.com/1qz7s8qOxk

Much in the way that Monster Energy Drink is for Kyles, someone else speculated as to the name of a dude who gets his ‘Claw on:

And speaking of Monster Energy memes…

And no good internet phenomenon would have been complete without a highly-regrettable meme tattoo!

By June of 2020, over a full year after the summer of hard seltzer was declared, the enduring popularity of White Claw had manifested in a Hold My White Claw meme account, which quickly amassed over 13,000 followers. The account primarily posts viral videos documenting the type of drunken shenanigans one can get into after consuming too many White Claws, among other types of alcoholic beverages.

Like it or not, it appears that White Claw is here to stay. In December 2020, Mark Anthony Brands announced new launches for a White Claw Iced Tea and Mike’s Hard Lemonade Seltzer that would be rolling out in 2021. The following month, White Claw announced a multi-year sponsorship of the Sundance Film Festival. A press release called the “partnership of the hottest alcoholic beverage in the United States” with the premiere film festival as marking “the intersection of art, culture, and community.”

White Claw is proud to be the official hard seltzer of the 2021 Sundance Film Festival, celebrating independent creators everywhere. pic.twitter.com/ESKvsg7vO1

“I can’t believe White Claw is finally a Sundance sponsor and the festival is remote,” tweeted film critic Vince Mancini on January 31, 2021. “So lame. I’m still gonna crush so many even if I have to buy them myself.”

In a nutshell, the withstanding popularity of White Claw can be summed up by the following 2019 tweet by user @sarahndipity18: “La Croix walked so that White Claw could run.”