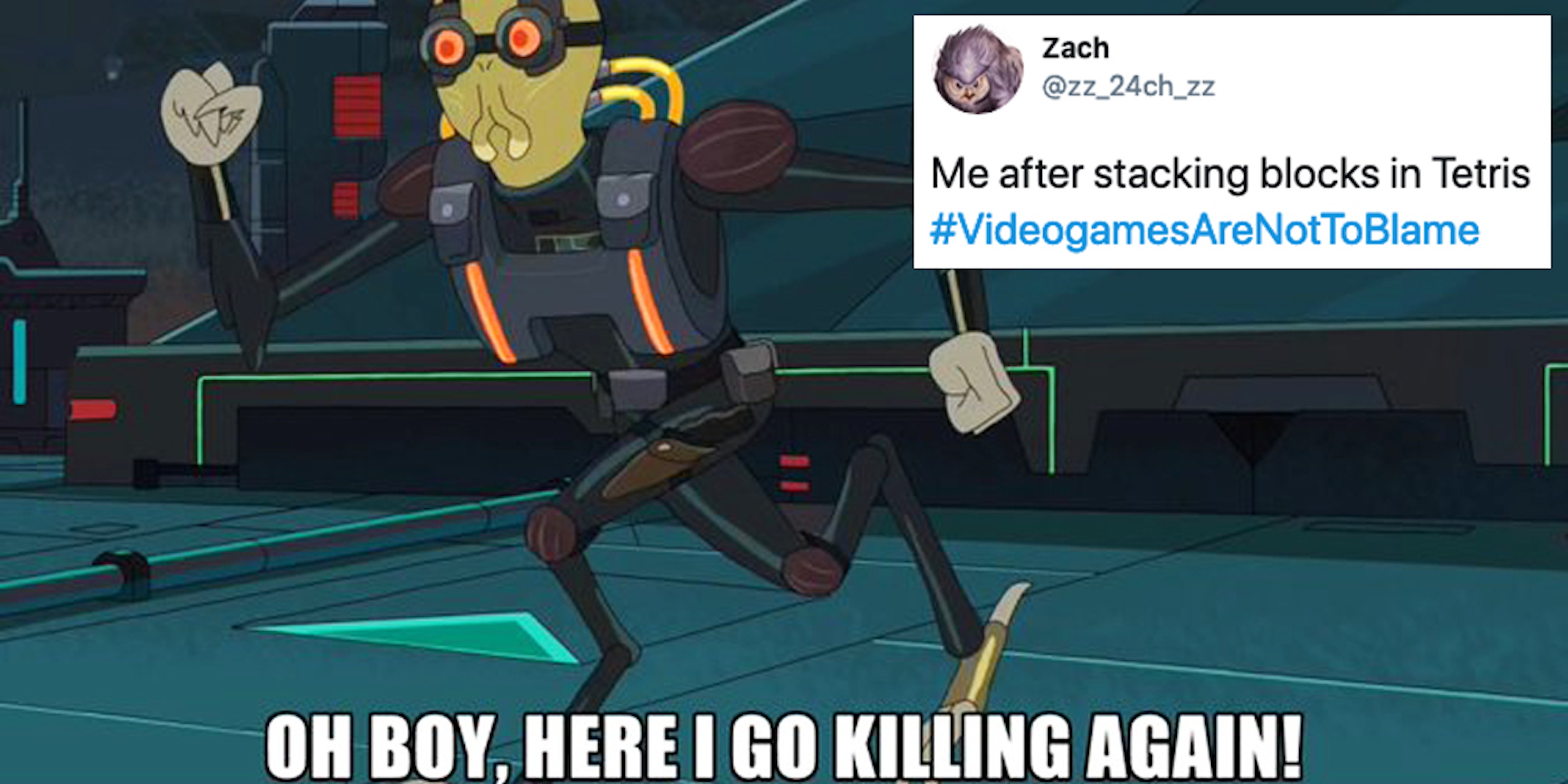 Gamers fire back with memes after video games get blamed for gun violence, yet again

These memes can't hurt you.

Following two deadly mass shootings in as many days over the weekend, politicians have yet again placed the blame on violent video games.

The excuse has been a favorite of politicians, particularly those against stricter gun laws, for years. Despite a complete lack of evidence—and heaps of research to the contrary—dozens of lawmakers choose, time and again, to go after gaming when gun violence strikes our country. In response to being blamed for the shootings in El Paso, Texas and Dayton, Ohio, gamers took to the web to express their own opinions on the matter in the most 2019 way possible: through memes.

Most of the memes poked fun at the ludicrous claim, which has been repeatedly debunked. As it turns out, the average American spends less on video games than people in South Korea and China, yet our gun violence vastly surpasses that of any other country. A Vox statistic illustrating this research was widely shared.

In the hours and days following the shootings, multiple hashtags surfaced on Twitter. #VideoGamesAreNotToBlame and #GamersAreGood both began trending, as gamers flocked to the defense of their favorite games.

Memes illustrating the sweet and wholesome things many video games contain rose in response to the accusations from President Trump and other politicians. “For the record, I played a shit ton of Zelda games growing up, and have yet to walk into a random stranger’s house and start breaking pottery,” one Twitter user wrote.

For the record, I played a shit ton of Zelda games growing up, and have yet to walk into a random stranger's house and start breaking pottery. #JustSaying#VideogamesAreNotToBlame

We all know when violence in the world started. If it wasn’t for the violent video game Pong, we would all be living in peace. #VideoGames pic.twitter.com/rm9uziXMTG

Even as many gamers mocked those spreading the idea that video games are to blame for violence, others chose to share stories of the good video games have done for themselves or others. “I blame Minecraft for teaching me to be creative and use my imagination,” one user wrote.

We’ve created an escape from the daily hell that is becoming our political climate, driven by bible thumping white supremacy. You wanna tell me that’s the problem. I’ve played very COD out there, Fortnite for all 10 seasons, Halo, Gears of War, and so do my friends.

I blame Minecraft for teaching me to be creative and use my imagination. #VideogamesAreNotToBlame pic.twitter.com/1qzJk3LZGz

In my experience of video games they have brought together a community of people who have supported me at my lowest point. When I was in need the video game community picked me up. So you can fuck off if you think video games inspire violence! #BCITW

Video games are never to blame. Most gamers including myself have made fantastic friends through video games, and they are no reason for the shootings. Do you think that meeting the objective of a game which may have violence will cause a mass shooting?#VideogamesAreNotToBlame

Despite the overwhelming number of voices speaking out against the claim, we are all but assured a similar response from politicians next time gun violence strikes our country. When it comes down to it, it appears that politicians find it far easier to blame video games for violence than to actually do something to protect their constituents.