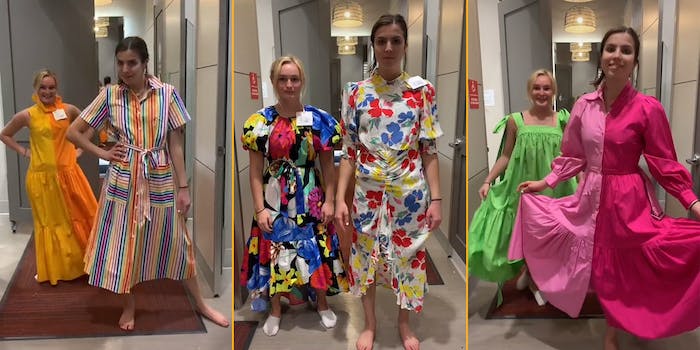 A white TikToker is being criticized over a viral video slamming a queer Black designer’s clothes for Target as “hideous.”

Katie Boggs, known as @_katieboggs, posted a controversial video in which she and a friend are in Target trying on clothes. The caption reads, “Absolutely preposterous that these are real.” In the overlay text, Boggs writes, “Trying on the hideous Target dresses since the fitting rooms opened back up.”

Additionally, the music for the video is a rendition of The Backyardigans song “Castaways” by Anania, a popular queer Black TikToker. The parody audio is evidently meant to match what they seem to perceive is ridiculous fashion.

The comments in the video appear split between “what in the circus tent” and “best collection I’ve seen at Target.”

Others on TikTok have been posting videos of the collection in its fully-styled glory.

He explains that most of the pieces are part of a Target designer collection by Christopher John Rogers, the Council of Fashion Designers of America’s 2020 American Emerging Designer of the Year. He notes that it’s significant for Rogers, a gay Black man, to have a collection in a large retailer like Target that brings editorial looks to ground level.

“They’re not ugly; maybe you don’t think that they’ll suit you,” he explains of the Target fashion pieces by Rogers. “They do, in fact, suit probably women of color, or women who just love color, or women of a particular body shape.”

Boggs did not immediately respond to the Daily Dot’s request for comment.