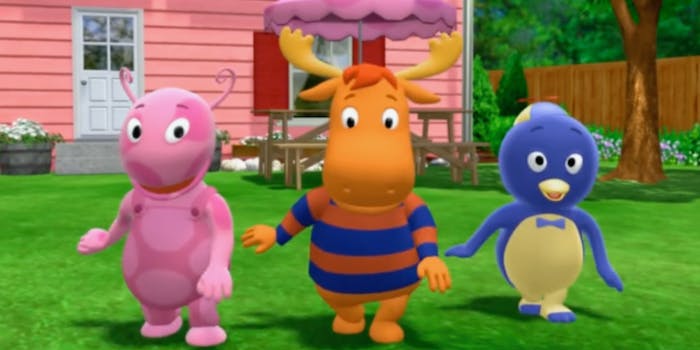 TikTok hooks can come from anywhere, whether it’s a beloved piece of dialogue from a movie or film, a song on the top of the Billboard charts, or—in the case of one of its latest success stories—a 15-year-old song from a children’s TV show.

The Backyardigans is a children’s show that aired on Nick Jr. from 2004 to 2013 and follows five friends who go on imaginary adventures with each other in their backyard. There’s often a musical component, like with the season 1 episode “Castaways.” The episode, which first aired in September 2005, focuses on Uniqua (which is the name of both the pink character and her species), Tyrone (the orange moose), and Pablo (the blue and yellow penguin) as they all imagine that they’re on a deserted island together. (Austin, the purple kangaroo, looks on from his house but is too shy to approach his friends.) Uniqua, Tyrone, and Pablo all launch into the song “Castaways,” which chronicles how they ended up on a deserted island in the first place.

It’s a rather easy-going and pleasant song, the kind of thing that—minus the context of The Backyardigans—you could imagine playing in a coffee shop or even a Studio Ghibli movie. And it’s pretty catchy, too

But last week, “Castaways” made a comeback in a big way as it debuted at #1 on the top of Spotify’s viral charts. And with the song available to use on TikTok, “Castaways” blew up in a big way, inspiring more than 189,000 videos to date. It’s unclear exactly what sparked the current drive, but a TikTok video from April that tries to explain why The Backyardigans is great and features the song has more than 215,000 likes.

For many TikTok users in their teens and early 20s, The Backyardigans is pure nostalgia. They have plenty of thoughts on who their favorite characters are and whether “Castaways” is even the best song.

Plus, with actual dance moves in the original video, “Castaways” is prime for a dance challenge.

LaTeya Roy created a remix of “Castaways” while Andy Yu reimagined the song as an indie pop hit.

And Josh Palmquist got his choir class to perform the song.

But the biggest shock of all might’ve been how “Castaways” even topped Spotify’s charts in the first place.

While we might not have that answer, one thing is clear right now: It’s the Backyardigans’ world and we’re just living in it.