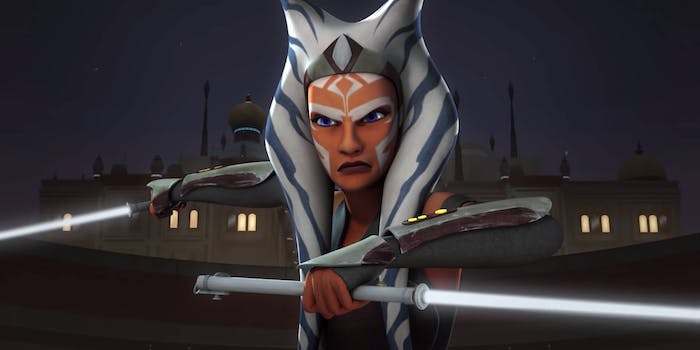 Everything you need to know about Ahsoka Tano from ‘Star Wars’

Have we seen the last of Ahsoka?

Rosario Dawson’s portrayal of Ahsoka Tano was definitely one of the biggest highlights of The Mandalorian Chapter 13, “The Jedi.”

Before her appearance in the Disney+ streaming series, Anakin’s young Padawan had thus far only made appearances in Star Wars’ animated series The Clone Wars and Rebels, along with a small voice cameo in Star Wars: The Rise of Skywalker.

There are many Star Wars fans who’ve completely missed out on Ahsoka’s story so far, however, and they have questions. So who is Ahsoka Tano exactly? Here’s everything you need to know about this fan favorite.

Who is Ahsoka Tano?

For those who haven’t taken the time to watch some of Star Wars’ supplemental series, Ahsoka Tano may not be a familiar figure. She has been a consistent part of Star Wars canon for more than a decade, but the character has passed entirely over the heads of many fans. She was first introduced in the animated Clone Wars movie, which hit theaters in August 2008, and was quickly followed by the Cartoon Network series.

Among viewers of The Clone Wars, Ahsoka is a fan favorite. She studied under Anakin Skywalker, with whom she built a charming, close relationship. For years, Ahsoka struggled to prove herself, only to ultimately reject the Jedi Order in pursuit of a different path. The intricate background of the Star Wars franchise is deeply explored in its animated series, and Ahsoka is considered by many to be the backbone of these extended stories.

Ahsoka’s story began as most younglings do: with her discovery by the Jedi Order. She was brought to the temple and trained, before ultimately becoming Padawan to Anakin. Their relationship started off rocky, but ultimately the two became very close. Ahsoka was eventually elevated to commander in the Clone Wars, during which she experienced her fair share of struggle and heartbreak.

What race is Ahsoka?

Ahsoka Tano is a female of the Togruta race. Many viewers falsely assume that Ahsoka is a Twi’lek, mostly due to several similarities in appearance. Twi’lek typically have a range of skin colors, from blues and greens to oranges and pinks. They are most distinguishable by the pair of long appendages that extend from their skulls, called lekku.

Ahsoka’s orange skin and similar—but not identical—lekku lead many to believe that she shared a race with other Jedi Knights like Aayla Secura. In truth, Ahsoka’s white facial markings and montrals—those curved horns—identify her as a Togruta from the planet Shili.

The white facial markings common among Togruta help to hide them from predators. Their hollow montrals are capable of detecting movement within a range of up to 82 feet around themselves. These horns grow throughout a Togruta’s life, often beginning as little more than bumps but eventually growing to prominent heights by adulthood.

Is Ahsoka a Jedi Knight?

Despite her general success as a Padawan under Anakin, Ahsoka never became a Jedi Knight.

We all know how Anakin’s story ended, but it wasn’t his surrender to the Dark Side that turned Ahsoka Tano away from the Jedi Order. Her split came several years before Anakin’s fall, after she was framed for the bombing of the Jedi Temple. While it was ultimately proven she was innocent, the incident revealed that Ahsoka’s path lay outside of the Jedi Order. Even after being offered re-entry, she refused.

Instead, she spent years in hiding following Order 66. When the rebellion rose, Ahsoka became a spy for the rebel network under the codename Fulcrum. The codename, suggested by Ahsoka, was later passed on to a number of rebel spies. As Fulcrum, Ahsoka gathered intelligence for the rebellion and recruited new members. Eventually, this path leads her to a clash with her former master, now Darth Vader.

Due to her relatively sparse appearances in mainstream Star Wars releases, many viewers believe Ahsoka Tano died during the Clone Wars. Thankfully, this belief is false.

Despite her many trials and tribulations, Ahsoka survived the Clone Wars and even Order 66 to fight alongside the rebellion. She dedicated her life to the cause, working alongside rebel cells and fighting against the might of the Empire.

However, her brief appearance in The Rise of Skywalker (more on that below) leaves fans to believe that she is now dead and survives only as a Jedi ghost.

Is Ahsoka in ‘The Rise of Skywalker‘?

Ahsoka is one of the several Jedi voices that Rey hears in a scene near the end of The Rise of Skywalker, but we never physically see her character.

Ahsoka Tano in ‘The Mandalorian’

The Disney+ series The Mandalorian, which began streaming in 2019, is set after Return of the Jedi and 25 years before the events of the new trilogy. Ahsoka Tano appears for the first time in physical form in a live-action series, portrayed by Rosario Dawson in Season 2, Chapter 13.

Ahsoka is clearly alive, and she informs Din Djarin that the Jedi Order has fallen. At the end of the episode, she instructs him to take Baby Yoda (Grogu) to a stone on the top of a mountain on the planet Tython, where the child can possibly connect with other Jedis through the Force. Will we see her again in The Mandalorian? It’s very likely, considering the popularity of her character.