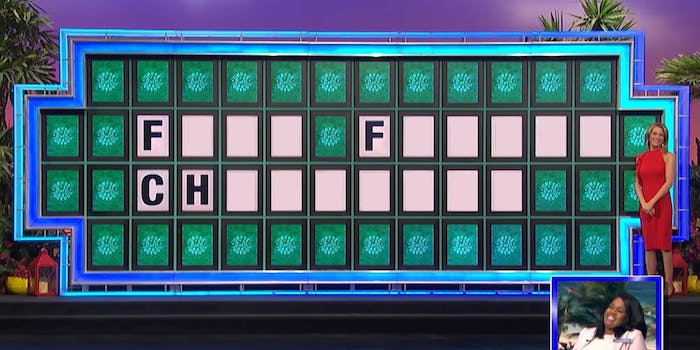 This ‘Wheel of Fortune’ parody account fills in all the blanks

These solved 'Wheel of Fortune' puzzles are what we wish the contestants would say.

If you have ever owned a television, at some point you probably sat in front of it trying to figure out the puzzle on Wheel of Fortune. After all, the show has been on over 30 years, and it’s a great way to feel smarter after Jeopardy convinces you that you’re an idiot.

In our heart of hearts, we all know that watching people fail miserably is the real reason we watch Wheel of Fortune.

Now there’s a parody Twitter account called “Wheel of Fortune Answers” that comes up with all the wrong answers we long for people to give on the show.

TOSS A CHURCH ON ME pic.twitter.com/ARxJhzSlmN

I NOW EXIST IN HELL pic.twitter.com/FNSjo1bjaI

And sure it would be better if we could hear these answers being shouted by excited contestants, followed by a buzzer sound and this face from Pat Sajak.

But that doesn’t mean they aren’t still great.

Although the account, which was only started earlier this month, now has over a hundred thousand followers, there’s no webpage attached and the bio simply reads “Solved Wheel Of Fortune puzzles,” meaning we don’t know who the genius behind it is. Whoever you are, keep it up. You’re doing a gr–t f–king j-b.