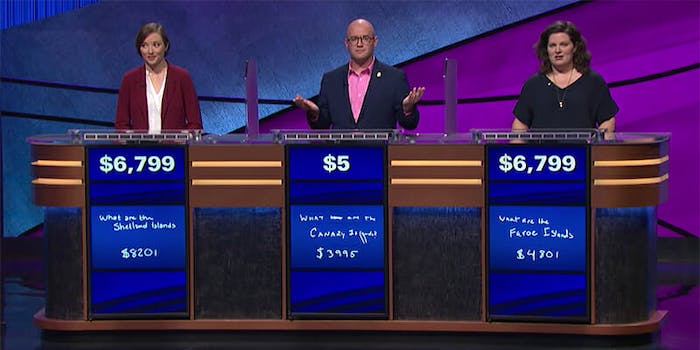 ‘Jeopardy!’ fans were shook on Thursday when the game show ended with its first-ever tiebreaker clue.

A video of the episode shows contestants’ shocked faces as they realize at the end of the Final Jeapordy! question that two of them have exactly $6,799 banked. Things get even crazier as host Alex Trebeck introduces a sudden-death round.

It’s not the first time in the game show’s 54-year history that there has been a tie, but it’s the first time a tiebreaker was used during a non-tournament game, according to ‘Jeopardy!’s website.

As YouTube commenter Ryan Conrath pointed out, it was particularly impressive that Trebek managed to be “Zen as fuck” through the process (though the show was likely edited down).

Needless to say, fans of the show were astonished at the moment. It was truly a rare spectacle in a game that is typically so buttoned-up and predictable.

Just watched Jeopardy come down to a sudden death question after a tie after final jeopardy.. what an exhilarating moment

When you witness your first Final Jeopardy tiebreaker… #jeopardy pic.twitter.com/4trVfaF3Sz

In the case of Thursday’s episode, the tiebreaker clue was about British Prime Minister Theresa May. We’re just glad it had nothing to do with football.